We introduced Relative Forage Quality as an improvement to RFV in 2002.  We released the term to better estimate energy and intake and to do it in accordance with NRC Nutrition Requirements for Dairy Animals released in 2001.  The 2001 NRC recommended use of a summative TDN (TDN = digestible CP + Digestible NDF + Fatty Acids + Digestible Nonfiberous Carbohydrate) and we incorporated that into RFQ.

RFV and RFQ are based on the same concept:

RFV calculates energy from ADF while RFQ is calculated by two different equations depending on whether the forage is primarily legume or grass.  For grass, the equation is based on actual animal feeding data from trials conducted in the Southeast during the 1980’s.  For legumes and legume-grass mixtures the equation is:

RFV and RFQ were designed to have similar mean and slope response so that the two numbers could be interchanged as we considered economic value.  We have seen from various data sets that means are similar but individual values deviate 20 to 40% of the time.  When numbers differ, digestible fiber is other than average and we believe that RFQ is a better estimator of value to the animal. 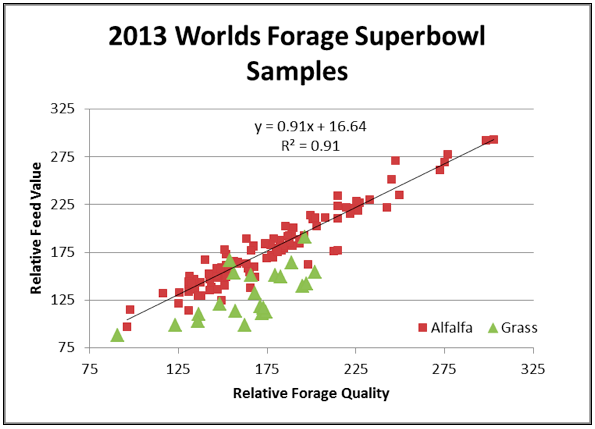 In samples from the Worlds Forage Superbowl (see graph) show that RFV and RFQ are highly correlated for alfalfa and with a similar mean (179 vs 177).  However the range of RFQ values at any RFV point is great (e.g. RFQ ranges from 140 to 213 for RFV of 175).

Observe as well that grasses tend to have higher RFQ than RFV values.  The mean difference from this data set was 34 points.

RFQ is useful for: 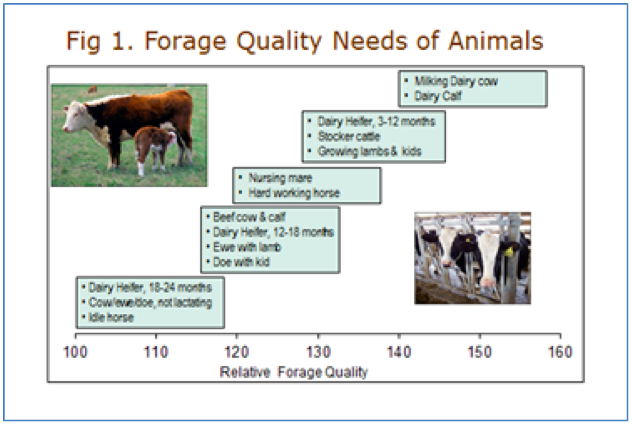