Alfalfa is a major profit center on most dairy farms. The annual yield for alfalfa has the largest impact on its profitability. As the stand ages, the yield declines due to environmental stresses, wheel traffic, and diseases. Since alfalfa yield declines with advancing age, producers should consider turning over stands faster to stay in a high yield range. This paper examined the factors that affect the economics of production and the profit from producing corn silage and alfalfa in rotations of various years.

The analysis was prepared using the Agriculture Budget Calculation Software (ABCS). This program allows the user to enter the tasks involved in the production recipe along with the inputs required by each task. For example, the corn-planting task requires the inputs of corn seed and starter fertilizer.

The ABCS program calculated the costs associated with using tractors and implements. The costs calculated are: energy, labor, repairs, ownership interest cost, and a depreciation charge. The number of acres a task was performed on in a year can cause the per acre costs to vary.

The ABCS program has a feature that calculates whole farm incomes and costs based on enterprise budgets. This feature requires the selection of a fixed acreage for comparison among rotations. The acreage selected was 328 crop acres which is the average acres for the highest percent group of dairy farms in Wisconsin. The manure (2632 tons) from a 65-cow dairy herd and replacements was accounted.

Six rotations, whole farm budgets, were studied within the 328 acre constraint. The rotation shorthand used the notation of “E” for the alfalfa establishment year, “A” for the alfalfa hay year(s), and “C” for the corn silage year(s). The rotations selected were: EAAAACCC, EAAAACC, EAAACC, EAACC, EAAC, and EAC or 8-, 7-, 6-, 5-, 4-, and 3-year rotations. The acres were divided equally between the years in each rotation. For example, the eight-year rotation (EAAAACCC ) would have 41 acres for each year of the rotation. There would be 41 acres for the establishment year, 164 acres for the four years of alfalfa, and 123 acres for the three years of corn silage. Table 1 gives the total acres by crop for each rotation. 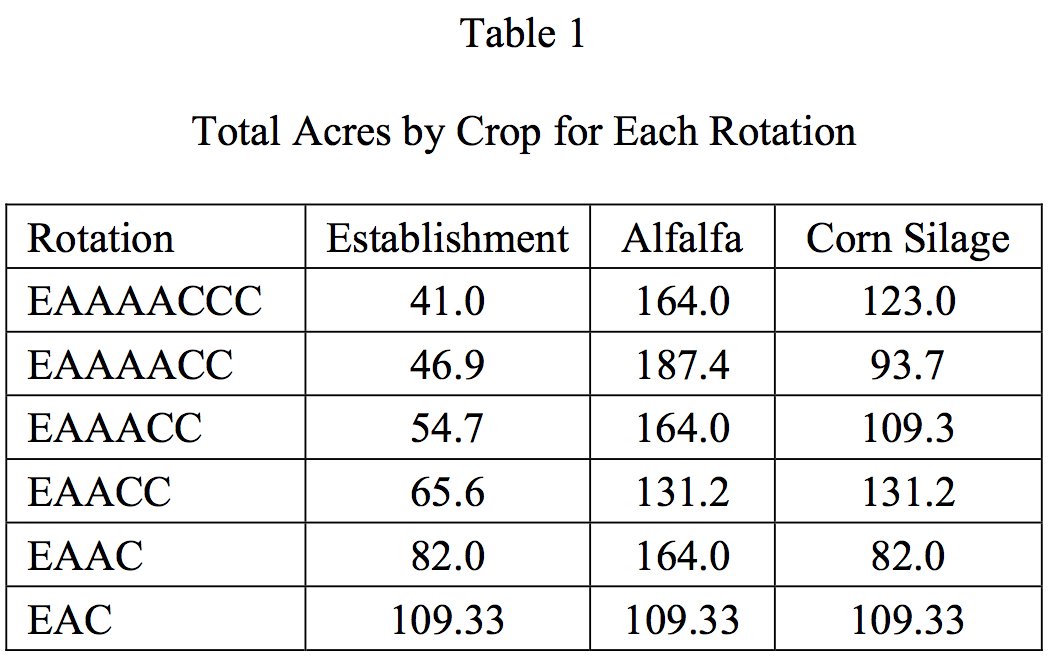 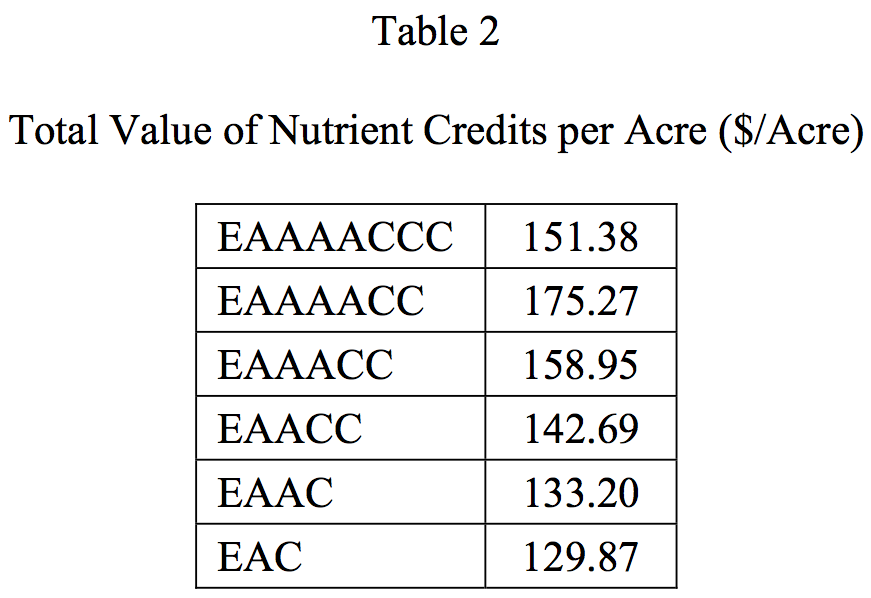 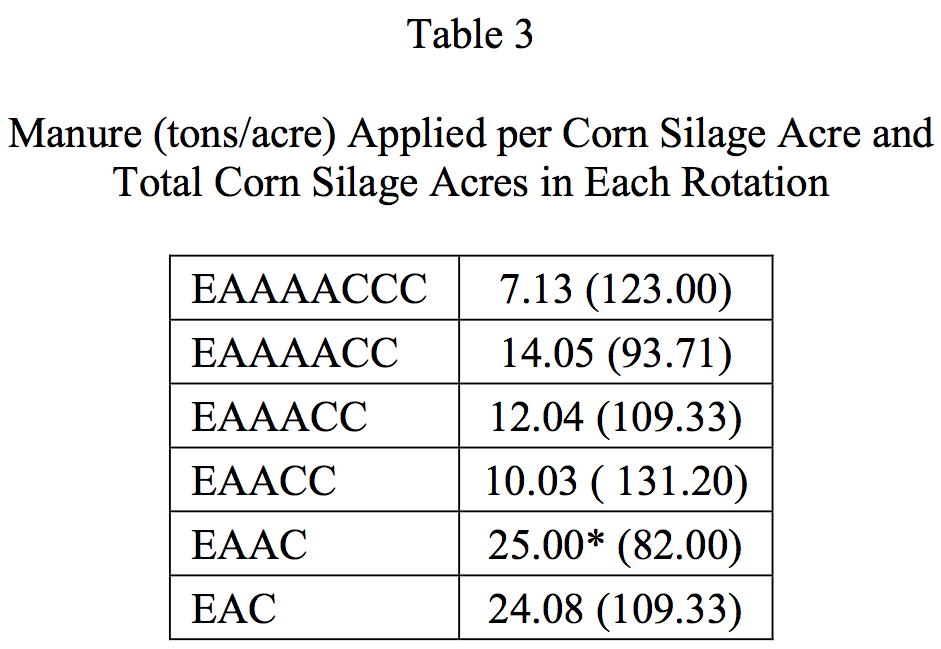 For the EAAC rotation, the acres in corn silage should have 32.1 tons of manure applied per acre. The recommended maximum application rate under University of Wisconsin recommendations is 25 tons per acre. If the total amount of manure available was applied, profit per acre increased by $8.33 per acre for this rotation. 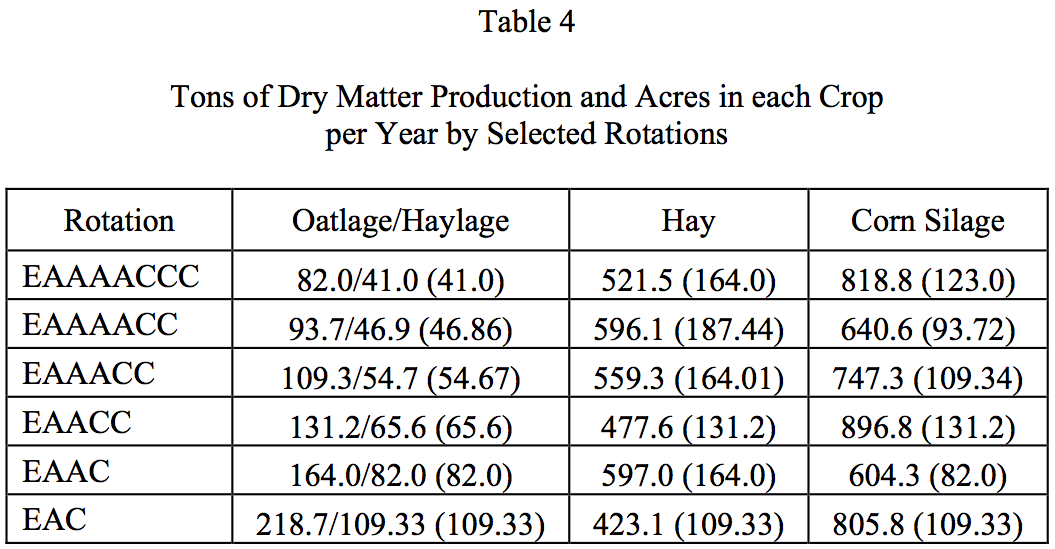 A producer may require more than the highest profit per acre from a rotation. A producer may want a certain mix of production in order to feed their dairy herd. Table 4 shows the production in tons dry matter (tdm) that would be produced on the 328 acres with the various rotations. The highest profit rotation (EAAC) produced 164 tdm oatlage, 82 tdm haylage, 597 tdm hay, and 604.3 tdm corn silage.

A closer examination of the total value of nutrient credits (Table 2) and the profit/loss for the acres in the rotations by crop (Table 6) helps to explain the results. Each acre of alfalfa established loses about $200. Examining the costs involved with establishing the alfalfa shows why this loss occurs. The total operating costs (inputs, energy, repair and maintenance, and input interest) were $263.07 per acre. The fixed costs (management charge, property taxes, operator labor charge, interest and insurance expenses, and depreciation expenses) were $153.75 per acre. The total costs were $416.82 per acre compared to the $218.94 value for the haylage and oatlage produced. Thus, the fewer years alfalfa is in the rotation, the more acres are required for establishment, the greater the dollar loss in the rotation. If a direct seeding of alfalfa was used, however, then the loss per acre would have been reduced to $0.73 per acre and the profitability of all the rotations in the study would have been increased significantly. The direct and fixed costs were similar to the oat-alfalfa establishment, but the value of the harvested alfalfa (3.5 tdm/acre) was much higher ($402.29). 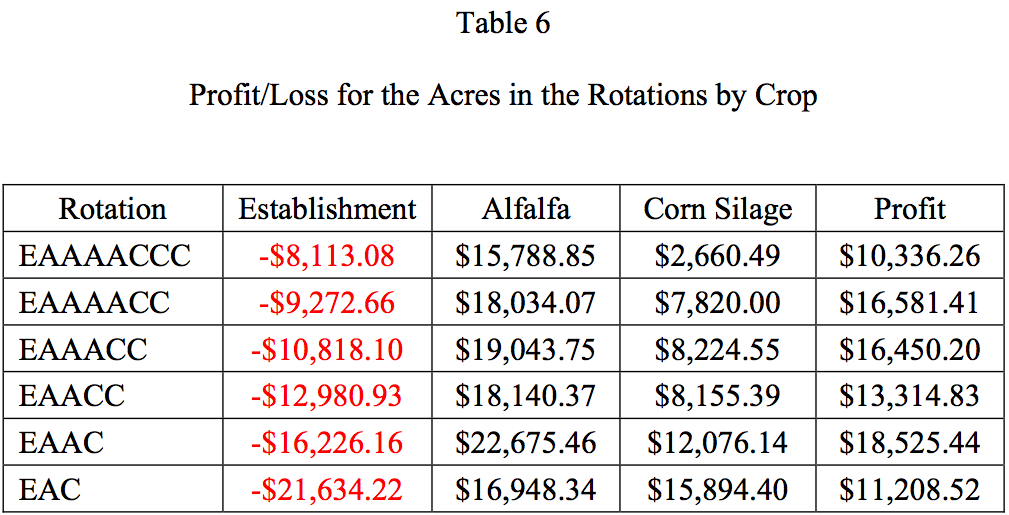 Some individuals do not include land in the calculation of return to assets, because the income from the long run average increasing value of land was not included in the profits from this enterprise. The results of this method are shown in column 4 on Tables 6 and 7.

The absolute change in return on assets was 0.51 percent (2.56 – 2.05). However, even these small absolute differences compound to large differences in net worth over the lifetime of a producer.

Profit is determined by the price times the yield minus the cost of production. Table 8 summarizes how sensitive the profit per acre was to the starting hay yield in tdm/A and the rate of hay yield decline per year in tdm/A. 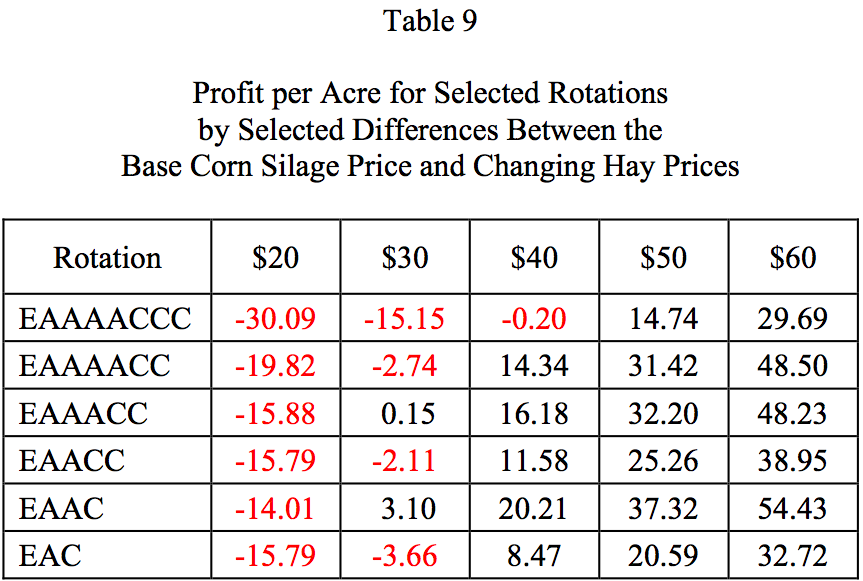