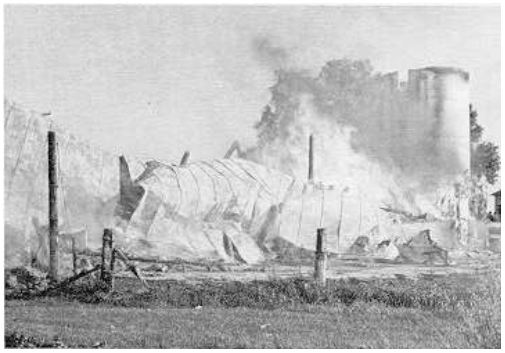 Numerous barn and silo fires occur annually in Wisconsin.  Barn fires, usually caused by spontaneous ignition of hay, occur during and after the haying season.
Silage may spontaneously ignite when it is ensiled at less than 40 percent moisture.  Barn and silo fires destroy human lives as well as buildings, equipment, feed and livestock.

After this barn fire, only the useless sheet metal roof and the remains of the water pipes and stanchions were left to haul away.  The silo was badly damaged.  Luckily the wind was favorable and, with the shielding provided by the silo, the house was saved.

Causes
A pile of hay or straw that contains more than 30 percent moisture is a fire hazard.  Whether it actually burns depends mainly on the size of the pile and the materials surrounding it.  If the heat developed in the pile can readily escape, the hay or straw only turns brown or gets moldy.  If there is enough hay or straw around a hot spot to prevent the escape of heat, and a slow infiltration of damp air, the hot spot will burn.
NOTE: Chopped materials (hay, straw, corn stalks) stored in a pile are more likely to spontaneously ignite than the same materials in bale form.

Measuring Temperatures
Drive a pointed tube into the stored hay and lower a thermometer into the tube.  If you don’t have a thermometer, drive an iron rod into the material and leave it for fifteen to twenty minutes.  If the rod is too hot to hold in your hand when you take it out, the situation is critical.

Causes
Silage stored at less than 40 percent moisture can ignite.  This large mass of stored material generates heat that cannot dissipate quickly enough, and a slow movement of air into the silage provides oxygen necessary for combustion.

Heating Stages
The heating stages in a silo fire are the same as those in a hay mow fire.
NOTE: The first and second heating stages occur normally during silage fermentation.

University of Wisconsin-Extension, Cooperative Extension, in cooperation with the U.S. Department of Agriculture and Wisconsin counties, published this information to further the purpose of the May 8 and June 30, 1914 Acts of Congress; and provides equal opportunities in employment and programming including Title IX requirements.

Produced by the Department of Agricultural Journalism, University of Wisconsin-Madison.