Hay producers working in humid environments are well-acquainted with the consequences of baling moist hays, which include heating, molding, losses of dry matter (DM) and nutritive value, and the possibility of spontaneous combustion. These problems are initiated through respiration by active plant cells and/or microorganisms associated with the hay that consume plant sugars in the presence of oxygen to yield carbon dioxide, water, and heat:

Commonly recommended moisture thresholds for safe hay storage vary with bale type and/or size; generally, these are 18 to 20% moisture for small (< 100-lb) bales, but about 3 to 5 percentage units drier for larger bales. Respiration causes the internal temperature of any hay bale to increase, and also facilitates drying by encouraging evaporation of water. Oftentimes, spontaneous heating is measured using heating degree days (HDD), which is similar to the growing degree day concept. Generally, HDD measures the difference between the daily internal bale temperature and 86°F, and then sums these differentials over the storage period. This can be viewed as a single number that represents spontaneous heating (both magnitude and duration of heating) within a bale. 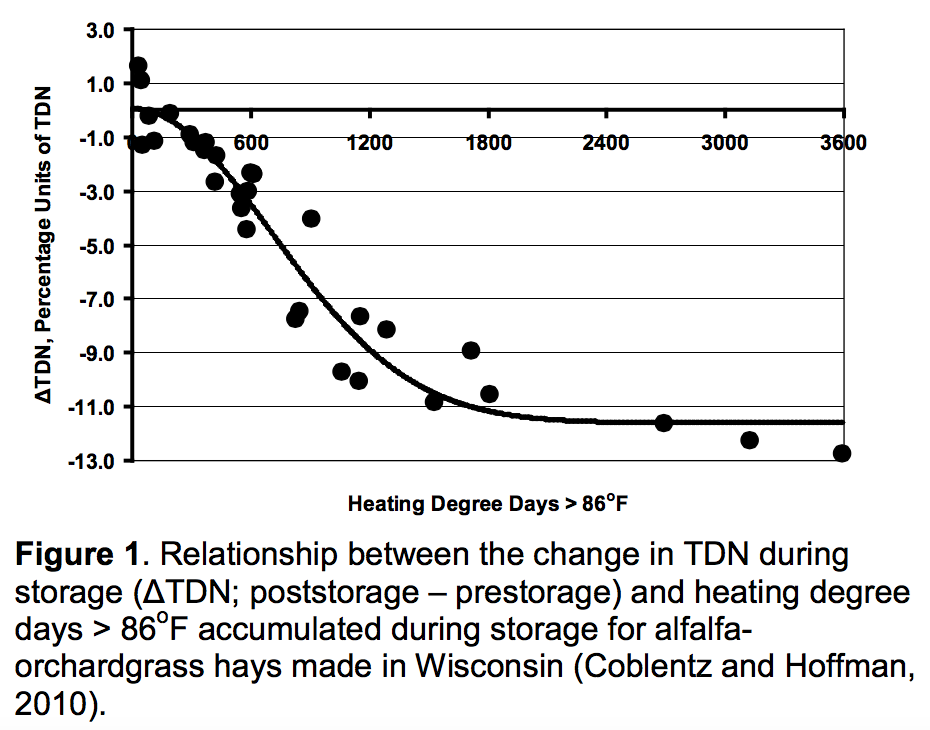 Traditionally, the effect of heat damage within forages has focused on reduced bioavailability of crude protein (CP) within ruminant animals. Reduced availability of CP occurs through the Maillard reaction, which includes a series of complex, multi-step pathways. However, recent research also has shown that losses of energy from heated hays are perhaps more important (Figure 1); therefore, preventing or limiting spontaneous heating is critical to prevent hay fires, but also to maximize hay quality. 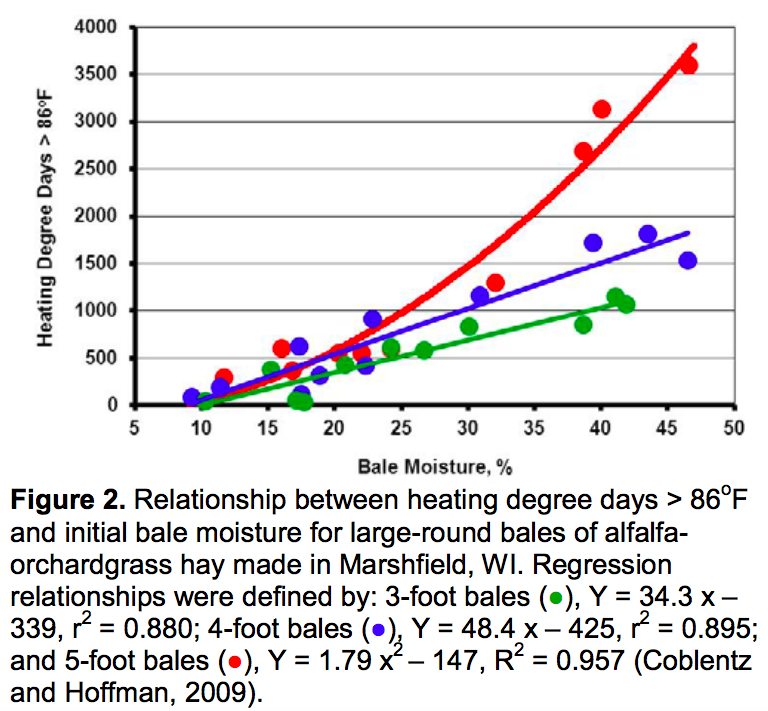 Within a given bale type and/or size, the moisture concentration of the forage at baling is the most important factor regulating any measure of heating. However, large-hay packages are much more likely to heat spontaneously, and to achieve higher temperatures than traditional small (< 100-lb) rectangular bales. These concepts are illustrated in Figure 2; large-round bales of alfalfa-orchardgrass hay were made in 3-, 4-, and 5-foot diameter round bales over a wide range of bale moistures in a recent Wisconsin study (Coblentz and Hoffman, 2009). Several important points can be gleaned from these data that include:

i) the relationship between spontaneous heating and initial bale moisture is positive;
ii) greater HDD were measured in larger diameter bales;
iii) for 3- and 4-foot diameter bales, the relationship between HDD and bale moisture was linear, but linearity was lost and HDD were accumulated at a more rapid rate within 5-foot diameter bales; and
iv) there was little scatter or variability of data points around the regression lines, indicating moisture content at baling is the primary factor driving heating within any specific bale type and/or size.

How are preservatives applied and how do they work?

Generally, hay preservatives can be grouped into three general categories that include organic acids or their salts, ammonia-based products, and microbial additives. Of these, the most commonly used are various formulations of organic (primarily propionic) acids. Theoretically, these products work by inhibiting growth of aerobic microbes within the hay, thereby reducing microbial respiration, accumulation of heat, and limiting losses of DM and reductions in nutritive value. Propionic acid-based preservatives are liquids that are usually buffered to reduce corrosive damage to farm equipment, and are applied via a tank or reservoir mounted on the baler. The preservative can be applied through spray nozzles fastened above the pick-up attachment on the baler, which is common for large-round balers, or discharged directly onto the hay within the bale chamber for small or large-square balers.

Have propionic acid-based preservatives been effective at reducing heating in small-rectangular bales? 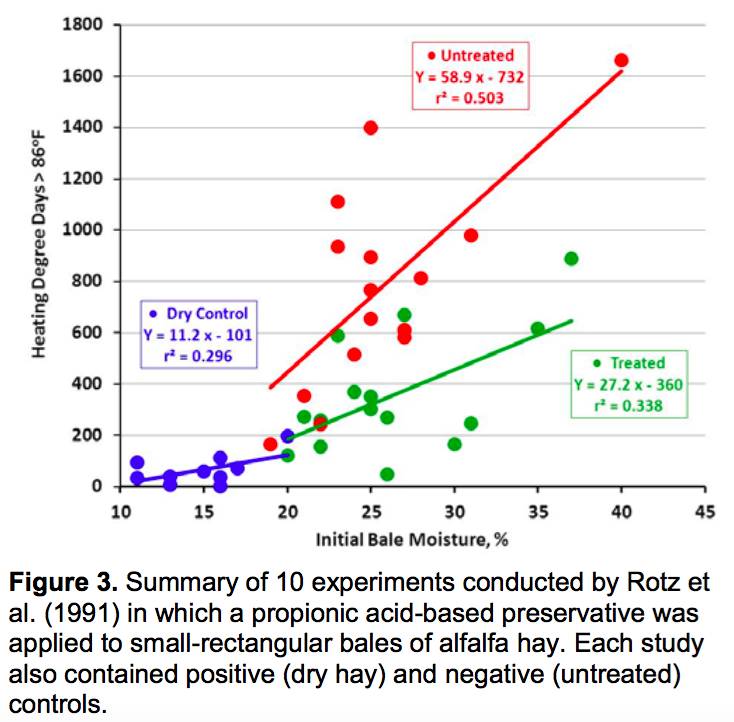 Propionic acid-based preservatives have been evaluated in published research for nearly 40 years. Most studies have demonstrated some effectiveness in limiting spontaneous heating relative to untreated control hays. However, these responses often have been inconsistent. Work compiled by Rotz et al. (1991) summarized 10 experiments in which a propionic-acid based preservative was applied to alfalfa hay. 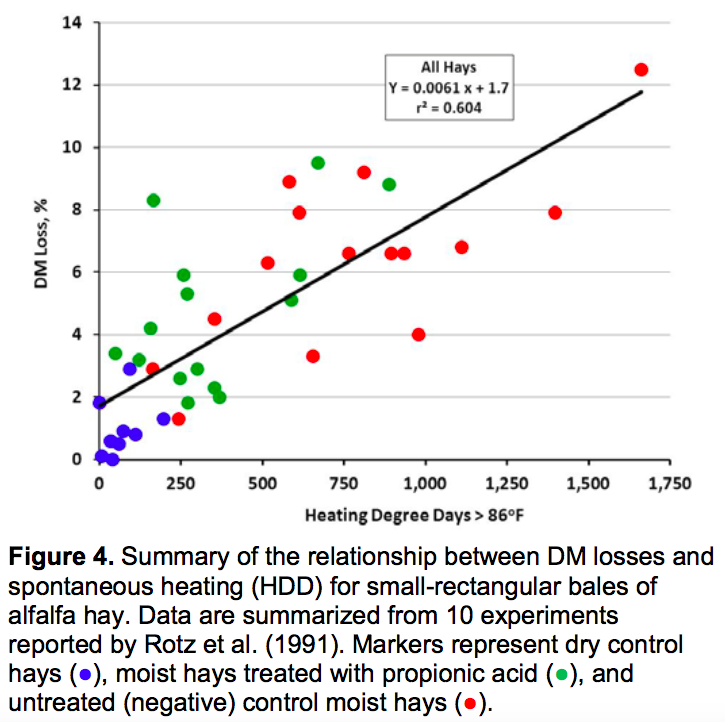 Each experiment contained: i) a positive (dry) hay control that was baled between 10 and 20% moisture; ii) hays treated with the preservative at elevated bale moistures (20 to 37%); iii) untreated hays baled at moisture concentrations comparable to treated hays (19 to 40%). Acid application rates ranged from 1.0 to 2.3% of bale weight, but the product was diluted by 50% prior to application. Some experiments included more than one treated vs. untreated comparison. Results of these studies are summarized in Figures 3 and 4.

Previously, studies conducted with large-rectangular bales in Wisconsin (Shinners, 2000) have shown that losses of DM and forage quality are positively associated with initial bale moisture, and that the most effective management approach for maintaining quality and DM recovery is to bale hay at < 16% moisture. Unfortunately, this is not always feasible in humid environments, such as Wisconsin. Another observation obtained from studies with both small- and large- rectangular bales was that hays treated with propionic acid-based preservatives maintained greater concentrations of moisture throughout the storage period, and potentially up to 6 months after baling, which may be related to the hygroscopic nature of propionic acid (Rotz et al., 1991; Shinners, 2000). As a result, it can be speculated that biological activity may continue for longer periods of time in acid-treated hays compared to untreated hays. 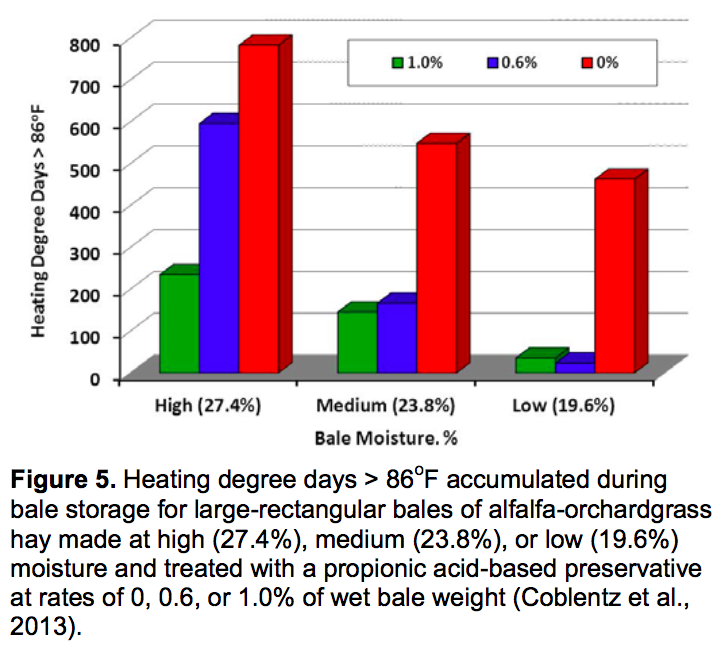 Recently, propionic acid-based preservatives were evaluated in a study conducted at the Marshfield Agricultural Research Station (Coblentz et al., 2013). Large-rectangular (3 × 3 × 6-foot) bales of alfalfa-orchardgrass hay were made at 27.4, 23.8, or 19.6% moisture and treated with the preservative at 0, 0.6, or 1.0% of wet bale weight (613 to 644 lbs). The preservative was applied directly into the bale chamber of the baler, and HDD accumulated during storage are summarized for each baling treatment in Figure 5. For high-moisture (27.4%) hays, there was a clear application-rate effect in which bales treated with the 1.0% application rate accumulated only 30% of the HDD exhibited by untreated hays. Generally, the response with the 0.6% application rate was intermediate, exhibiting some reduction of HDD relative to untreated hays, but heating more severely than hays treated with the 1.0% application rate. Hays baled without the preservative at 23.8 and 19.6% moisture accumulated 549 and 463 HDD, respectively, which was far greater than observed for treated hays, regardless of application rate. Within these drier hays, both application rates performed similarly. It is important to note that hay bales evaluated in this study were monitored for heating on an individual basis (no stacking). Caution should be applied in extrapolating these data to stacks of large-rectangular bales in which there is less surface area per unit of DM, and fewer routes for dissipation heat out of the stack. 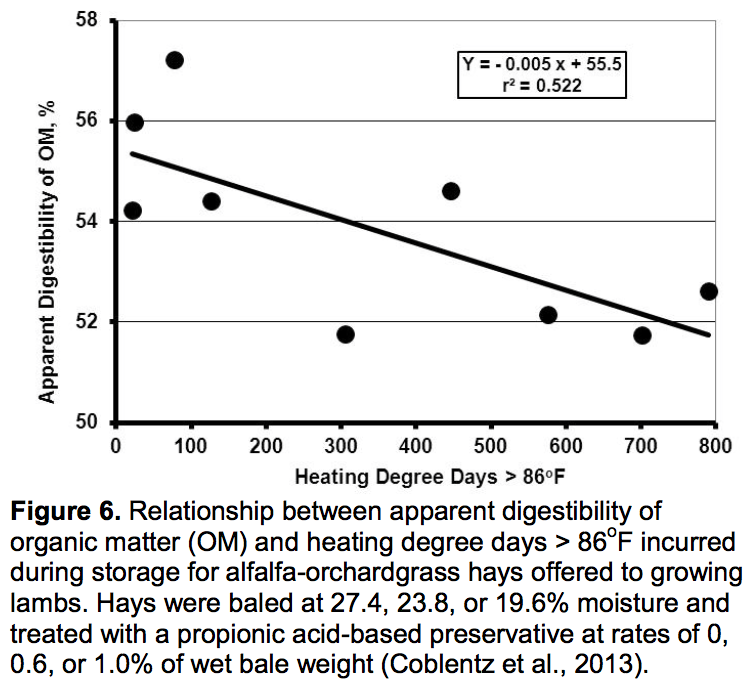 In the same experiment, hays were offered to growing lambs to assess total-tract digestibility. Generally, the digestibility of forage nutritional components was related directly to the spontaneous heating that occurred within each baling treatment (Figures 6 and 7). 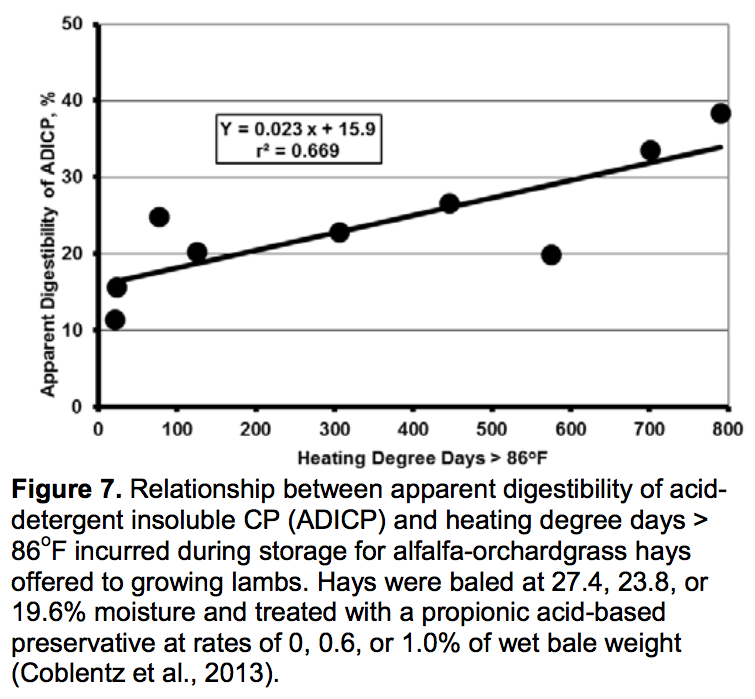 Digestibility of organic matter (OM) from these hays declined at a rate of approximately 0.5 percentage units per 100 HDD; therefore, digestibility of OM was depressed by about 4 percentage units over the range of HDD exhibited by this selection of baling treatments. Conversely, digestibility of heat-damaged protein (ADICP) increased with spontaneous heating (Figure 7). There is some native ADICP in all forages, which is assumed to be completely indigestible. In practice, the Marshfield research data supports this premise, exhibiting a y-intercept of 16% of ADICP, which is an estimate of ADICP digestibility when HDD = 0 (no heating). However, concentrations of ADICP increase as hays incur spontaneous heating during bale storage, and some of this additional (heat-damaged) ADICP retains some (limited) bioavailability (Figure 7). It is important to emphasize that the positive association between ADICP digestibility and HDD is not desirable from a management perspective, and that heating substantial enough to cause these responses is accompanied by losses of energy from the forage, primarily through respiration of highly digestible plant sugars. This concept is illustrated for these same hays in Figure 8, where TDN declined in a close linear relationship with HDD, losing about 0.5 percentage units of TDN for every 100 HDD incurred during hay storage. 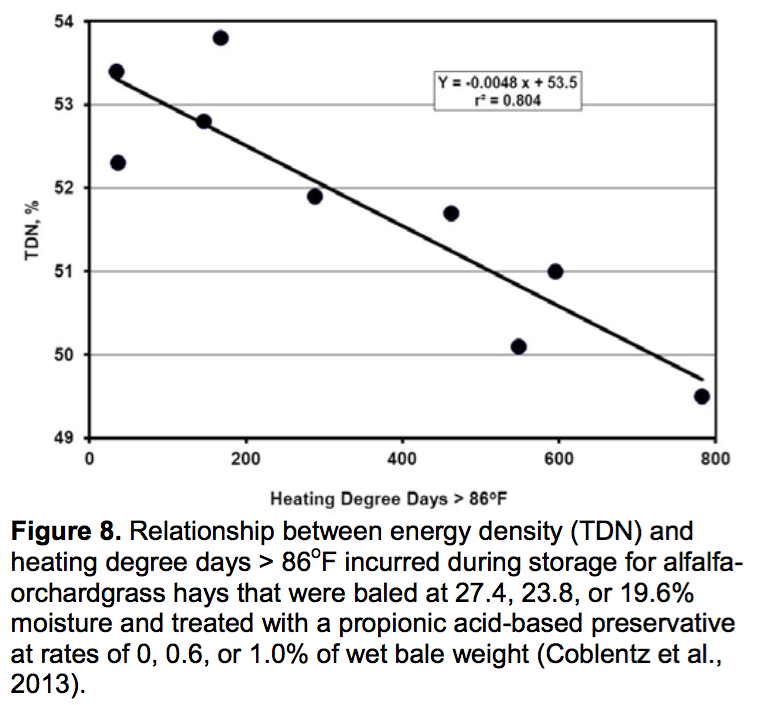 Generally, losses of energy (TDN) are often overlooked as an essential component of hay production and management. A recent survey study reported that 50% of 3612 hay or haylage samples sent to commercial laboratories lost at least 4 percentage units of TDN via spontaneous heating during storage (Yan et al., 2010). Among these damaged hays, 586 (16% of all samples) lost at least 8 percentage units of TDN; these losses of energy constitute a significant economic loss for many livestock producers.

Have these propionic acid-based preservatives been studied for use on large-round bales?

Unlike the studies with large-rectangular bales, recent experiments at the Marshfield Agricultural Research Station with 5-foot diameter round bales of alfalfa hay have been disappointing (Coblentz and Bertram, 2012). In these studies, acid preservative was applied at a common rate (0.5 ± 0.14% of wet bale weight) across 42 alfalfa hay bales ranging in moisture concentration from 10.2 to 40.4%. 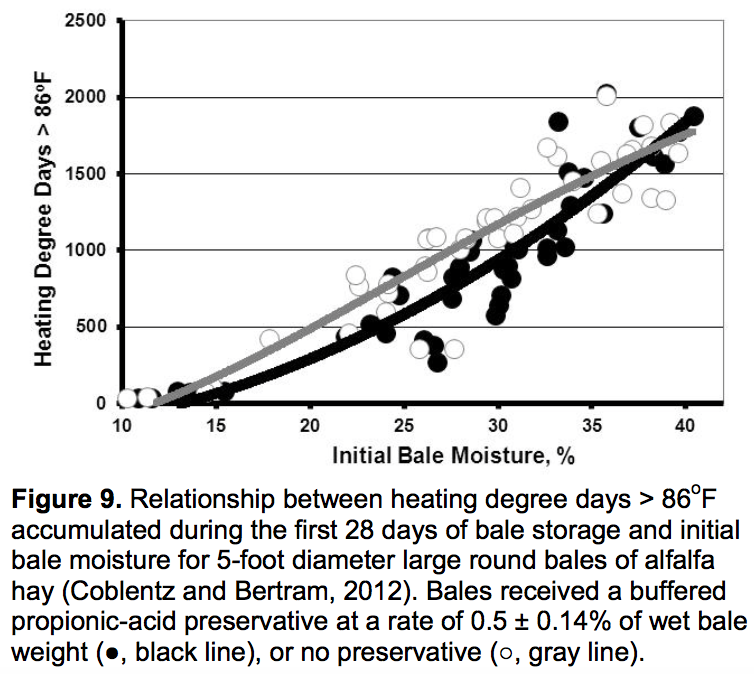 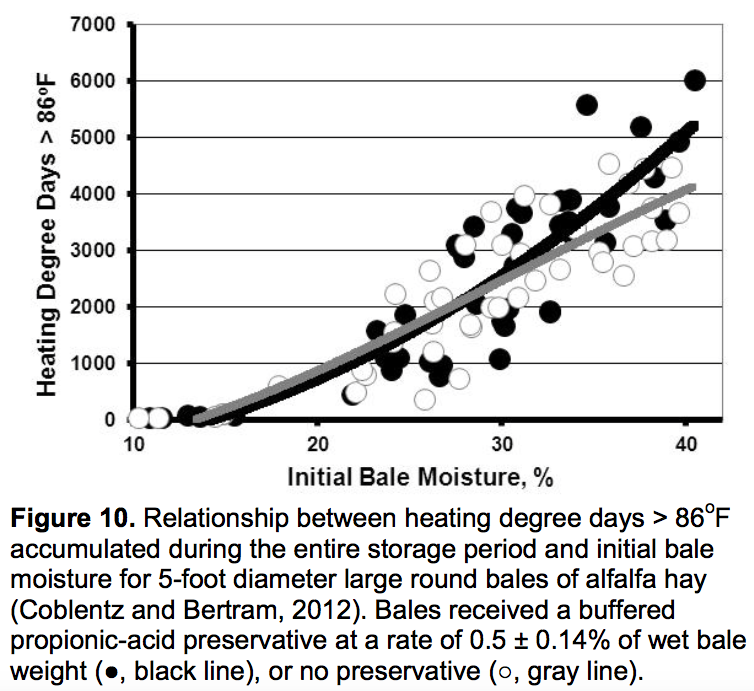 The vastly different responses between large-round and large-rectangular bale types also are difficult to explain. Acid-treated hays in the large-round bale study retained more moisture for months after baling compared to untreated control hays, much as described previously for small- and large-rectangular bales (Rotz et al., 1991; Shinners, 2000). Furthermore, observations made during the trial suggest that this retention of moisture permitted extended microbiological activity. In effect, treated large-round bales exhibited what can be described as a low-grade fever for an extended period of time (often weeks) relative to untreated control hays, and simultaneously accumulated HDD at a slow, but consistent, daily rate long after untreated hays ceased heating.

For large-round balers, acid-preservatives often are applied through after-market distribution systems in which application nozzles are mounted directly above the pick-up attachment on the baler. Preservative is sprayed over the entire pick-up area, which results in potential for waste, especially when windrows are thin. Normally, the preservative is applied at constant pressure; therefore, the application rate is determined by the size of the spray nozzles, and the time needed to make a bale. Even the most diligent hay producer would not be expected to change spray nozzles more than once or twice per day in response to hay condition; therefore, application rate per bale is primarily a function of baling time. This often works against the operator because the forage in thin windrows also is often drier, yet more time is required to form a bale, resulting in over-application. Conversely, heavy windrows often are wetter, but the bale also is made faster, resulting in under-application. Some of these application problems can be overcome by altering baler ground speed, but this represents very coarse rate control. In addition, it becomes difficult to increase percentage-based application rates in wetter hays (for example, 1% of wet weight) because attempts to increase the amount of applied preservative are offset by concurrent bale-weight increases resulting from trapping additional water in the bale.

If acid-preservatives are to be used with large-round bale packages, a few suggestions for improved performance could be considered:

Results of numerous research studies dating back nearly 40 years indicate that propionic acid-based preservatives clearly reduce spontaneous heating within moist hays, but do not eliminate heating entirely. Generally, research results have been somewhat erratic, and this may be related to wide variability in production practices, the specific formulation of the preservative, baling equipment design, bale size and/or type, as well as storage management. Designing and conducting experiments with large stacks of acid-treated hay is especially difficult, and allows for legitimate questions about how to extrapolate favorable results obtained from studies using single large bales as the experimental unit to stacks of large bales. Despite these concerns, several conclusions and suggestions can be stated with reasonable certainty: