Medium square bales (800 to 1000 lb) are increasingly being used across the northern dairy regions to reduce the labor associated with hay and haylage making.  If making hay, these bales need to have 2 to 3% less moisture at baling than small square bales to avoid molding and heating.  If is often difficult to get the hay dried to 16 percent moisture for safe baling in these regions so it is frequently necessary to use a preservative or to wrap the bales with plastic to avoid spoilage.

In a series of studies at the University of Wisconsin Lancaster Research Station we have examined some of the variables concerning plastic wrapping bales for either hay or haylage.  All studies used 34 by 32 by 60 inch bales that were alfalfa or alfalfa/grass mixtures.  All studies were done at least twice to get different hay making conditions.

In one study we looked at the thickness of plastic necessary to preserve either wet hay or to make haylage.  We used both 1 ml and 1.5 ml thick plastic and then wrapped different bales with either 2, 3, 4, 5, 6, 7, 8, 9, or 10 wrappings.  Bales averaged 30% moisture at baling and wrapping. 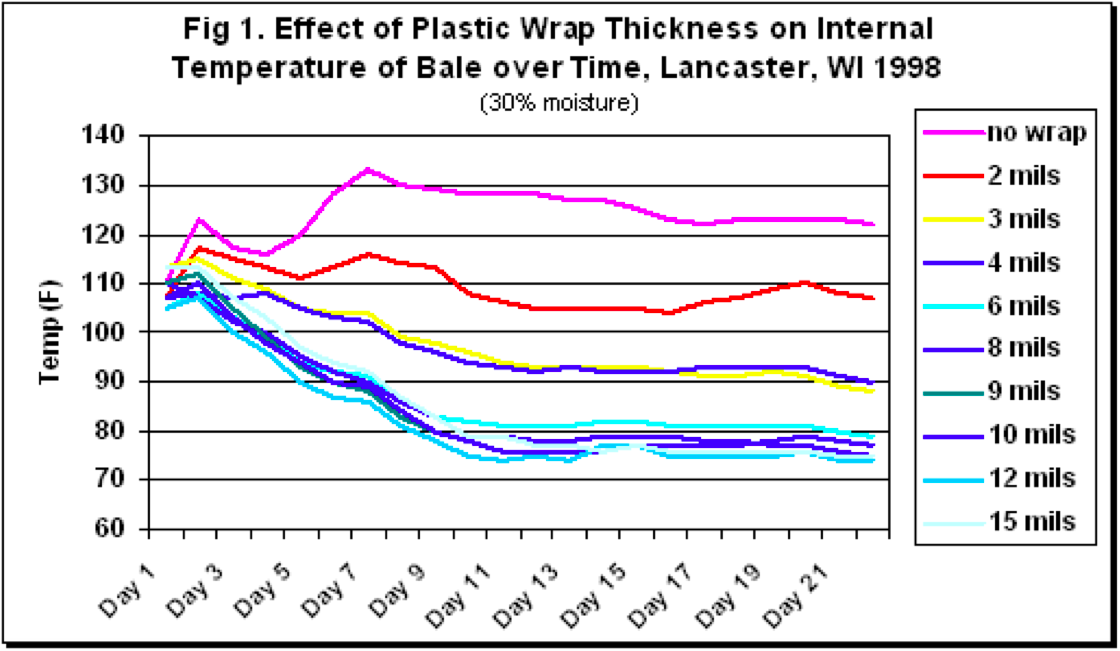 We monitored the internal temperature of these bales.  As shown in figure 1, when the thermistors were inserted into the bales, temperatures were at about 105°F.  The unwrapped bale continued to rise in temperature, reaching a maximum of about 134°F.  Bales wrapped with two 1 ml layers of plastic remained between 105 and 110°F, indicating that oxygen was leaking through the plastic to support continued microbial activity.  These bales also had significant mold throughout when opened for feeding.  When bales were wrapped with six mils (either four 1.5-ml layers or six 1-ml layers) or more of plastic, the temperature of the bale immediately began to decline and fell to ambient temperature in eight to nine days.  These bales had only a little white mold on the exterior of the bales.

When we looked at the forage analysis of the bales as they were unwrapped for feeding, we found increased levels of ADFIN in bales with less than 4 mils of plastic compared to bales with 6 mils or more wrapping.

This study was also conducted with bales made at 56% moisture to look at making haylage in square bales.  In all cases, 6 to 8 mils of plastic were needed to produce good quality haylage in the bales.

Thus it appears that bales should be wrapped with at least 6 mils of plastic (8 is probably best to reduce air leakage due to tears in plastic).  Total plastic thickness, not number of wrappings, appears to be the most important factor as oxygen diffuses through thinner plastic wrappings and causes spoilage.  Thus it might be more cost effective to use 1.5 ml plastic to wrap 4 to 5 times rather than use the extra time and labor to wrap 8 times with 1 ml plastic.

Since bale wrapping is usually a separate operation from baling, the next most common question was how quickly bales needed to be wrapped after baling to preserve quality.  In a second study we baled alfalfa/grass mixtures at either 36% or 63% moisture and then wrapped the bales either immediately (0 hours), 12, 24, 36, 48, 72, or 96 hours after baling.  All bales were wrapped with 8 mils of plastic. 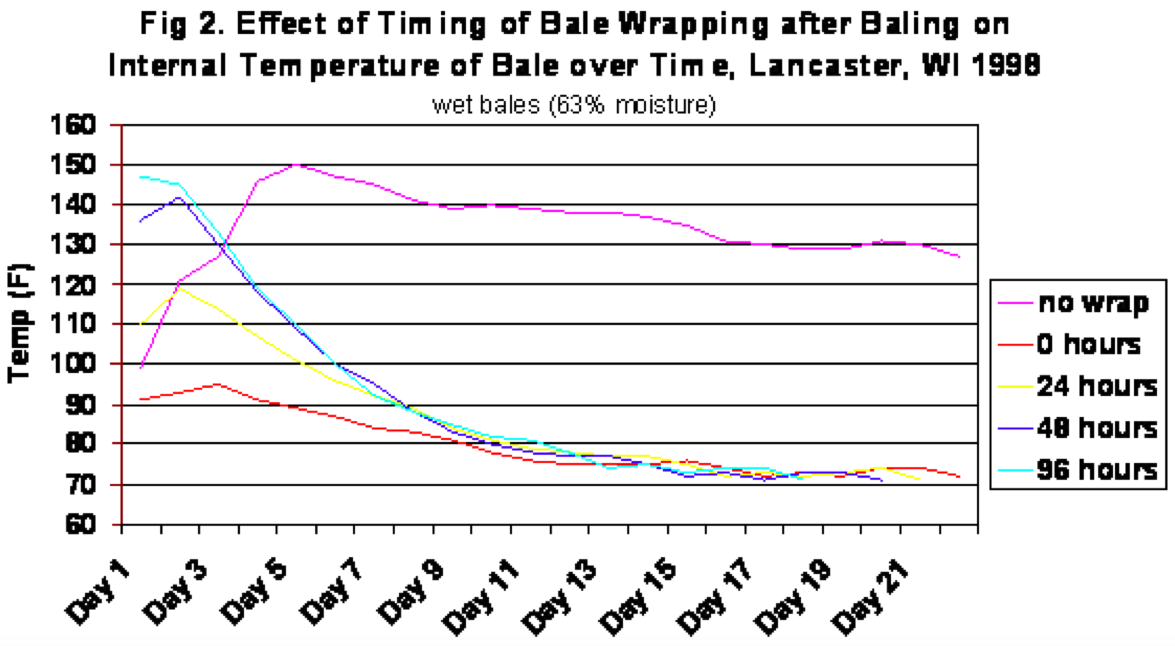 Figure 2 shows the internal temperature of the bales made for haylage at 63% moisture with ‘Day 1’ being the time of wrapping, not baling.  In all cases, the internal bale temperature began to fall within 48 hours of wrapping.  The unwrapped bales reached 150°F which is near to the temperature that spontaneous combustion could start.  Had the bales been stacked or in unventilated areas, fire might have started.

Figure 3 shows the internal temperature from the bales made at 36% moisture and then wrapped at the varying times after baling. 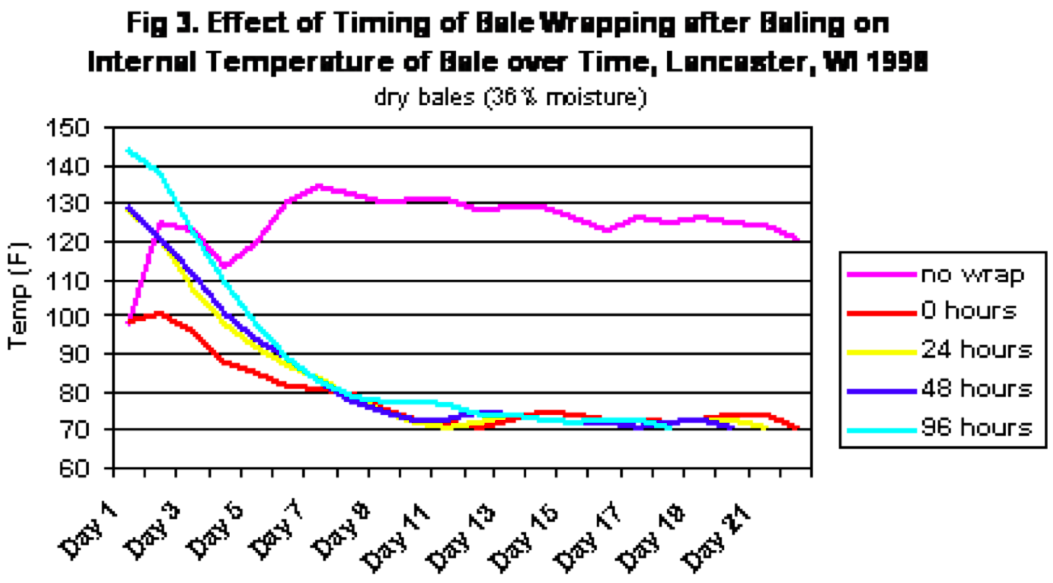 While temperatures did not get as high as when the wetter bales were wrapped, unwrapped bales or those left more than 48 hours before wrapping, exceeded 130°F.  These bales tended to have lower forage quality and greater mold throughout the bales.

From this study we learned that bales should be wrapped within 24 hours after baling to avoid the higher internal temperatures, lower forage quality and greater mold associated with longer delays in wrapping.

In summary, these studies over the past several years have shown that wrapping medium square bales is an effective method for either preserving wet hay or making haylage.  The advantage of plastic over use of preservatives is that, while cost is about the same, plastic wrapping can preserve bales over any moisture range.  The major management considerations are to wrap bales within 24 hours of baling with an 8 ml thickness of plastic.

Here are some additional do’s and don’ts to make wrapped bales work successfully:

While the objective of many farmers and hay producers is to make dry hay, most would agree that wet wrapped baleage has the highest feed quality.  In addition, making baleage decreases the chance of a lost crop to weather, provides more dry matter harvested from the field and has less feeding waste.  While bunkers, bags and tower silos are more popular, bales are by far the easiest to transport and they make a flexible addition to most feeding programs.