There continues to be a lot of interest in corn silage harvested with a self-propelled forage harvester (SPFH) equipped with an aftermarket processor having cross-grooved processing rolls set for 2- to 3-mm roll gap and greater roll speed differential than has typically been used (32% versus 21%). Also, the developer of this processor recommends that the SPFH be set for a longer theoretical length of cut (TLOC; 26 to 30 mm) than has typically been used in the past (19 mm TLOC).

This silage has been called corn shredlage by the developer of the new processor (Shredlage®, LLC; http://www.shredlage.com/). Thus far this processor has just been adapted for Claas SPFH, although shredder roll kits have been made available for the other makes of SPFH. During the 2014 harvest approximately 600 shredlage processors and shredder roll kits were in operation according to the developer of the shredlage processor.

We recently completed a second controlled feeding experiment with corn shredlage at the University of Wisconsin – Madison dairy farm in Arlington, Wisconsin. The purpose of this Focus on Forage article is to provide an update on corn shredlage based on the results from this experiment.

What were the key findings from the first feeding trial?

For a detailed summary of our first feeding trial refer to the 2012 Focus on Forage article 14:2 (https://fyi.extension.wisc.edu/forage/files/2014/01/Shredlage-FOF.pdf). In that study we used a conventional corn silage hybrid harvested as either corn shredlage (30mm TLOC) or conventional-processed (19-mm TLOC) corn silage. Key findings were as follows:

What were the experimental methods for the second feeding trial?

We evaluated: 1) the response to corn shredlage in a brown midrib (BMR) corn silage hybrid, and 2) whether the greater TLOC setting on the SPFH for the harvest of corn shredlage increased the physically-effective fiber (peNDF) content of the silage.

Mid lactation Holstein cows were used in a 16-week continuous-lactation experiment in our university dairy herd with 15 replicated pens of 8 cows each. The respective treatment TMR contained 45% (DM basis) from either SHRD or KP. Both TMR treatments contained 10% alfalfa silage and 45% (DM basis) of the same concentrate mix comprised of dry ground shelled corn, corn gluten feed, solvent and expeller soybean meal, rumen-inert fat, minerals, vitamins, and monensin. Additionally, a third treatment TMR (KPH) was included in the experiment to focus on the peNDF question. This ration was formulated with 35% KP, 10% alfalfa silage, 10% chopped hay, and 45% (DM basis) of the same concentrate ingredients adjusted in proportions in the mix to balance dietary crude protein and starch concentrations across the three treatments.

What were the processing score and particle size results?

Corn silage processing scores on feed-out samples averaged 72% for SHRD and 68% for KP with less variation observed for SHRD over the duration of the experiment. The sample range (difference between maximum and minimum samples) was 10%-units for SHRD and 21%-units for KP. 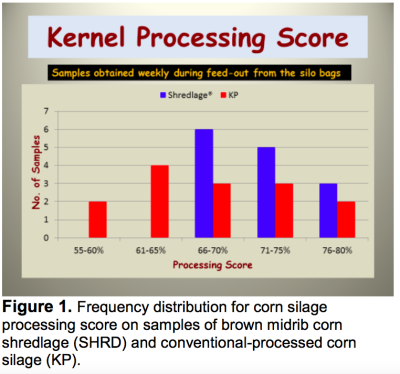 For SHRD, all processing scores were above 65%. However, for KP 43% of the samples obtained on a weekly basis throughout the feeding trial were at or below a processing score of 65% (refer to Figure 1).

The proportion of coarse stover particles was greater for SHRD than KP for samples collected during feedout from the silo bags throughout the feeding trial (18% versus 7% as-fed particles retained on the top screen of the shaker box).

For the TMR fed throughout the trial, the proportion of as-fed particles on the top screen of the shaker box was greater for SHRD than KP or KPH. Our measurements of weigh-backs during the trial indicated minimal sorting and no differences in sorting among the three treatments.

Was there a difference in the performance of the cows? 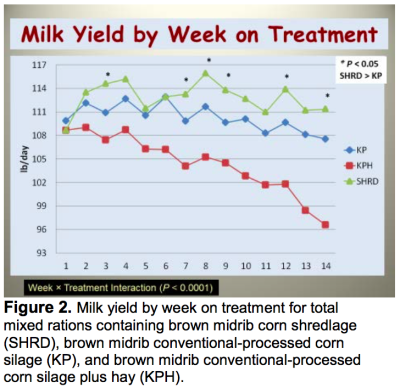 Milk fat content was greater for KPH (3.7%) than KP or SHRD (3.3%). Rumination activity measured using the SCR rumination collars averaged 8.4 hours per day and was not different among the treatments. Using milk fat content and rumination activity data to assess peNDF suggests that the peNDF content of SHRD was not improved despite its longer TLOC and increased percentage of as-fed particles on the top screen of the shaker box compared to KP. Milk fat yield was not statistically different among the treatments but was numerically greatest for KPH and lowest for KP. Similar to the milk yield differences, milk protein and lactose yields were greatest for SHRD and lowest for KPH.

In summary, the lactation performance response to corn shredlage using a BMR corn hybrid was of similar magnitude to the response observed in our earlier trial with a conventional corn hybrid. Despite a longer TLOC setting on the SPFH and increased particle size for corn shredlage relative to conventional-processed corn silage, milk fat content and rumination activity were not increased. Evaluate particle size and processing score of corn shredlage to determine the best ration formulation strategies.