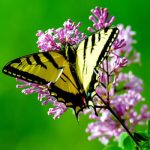 A commonly used neonicotinoid pesticide may have significant lethal and sublethal effects on monarch butterflies, new University of Guelph research has revealed.

The findings could offer another possible explanation for the massive decline in the North American monarch population over the last few decades.

Led by U of G integrative biologist Dr. Ryan Norris, the two studies examined the impact to monarch caterpillars raised on milkweed treated with clothianidin, an insecticide that is coated on soy and corn seeds and taken up into the foliage.