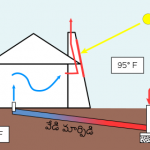 As the largest employer in its city of 5,000, when Edgerton Hospital made the decision to replace its aging and increasingly expensive facility, it was a big deal. Perhaps an even bigger deal was the fact that the hospital’s administration made a commitment to put sustainability at the forefront of this project – a decision not to be taken lightly in an industry as energy-intensive as healthcare. After two and a half years of planning, the hospital received funding from the Department of Housing and Urban Development to re-build in 2010 with the guiding principles of energy efficiency, environmental stewardship, and sustainability. These principles were incorporated into the project through innovations such as green roofs, natural light sources, water efficient landscaping, and organic building materials. The real showstopper for this project, however, was a geothermal system that would heat and cool the hospital.