The European corn borer (Ostrinia nubilalis) is potentially a serious pest of corn grown for silage. In Wisconsin, the European corn borer (ECB) generally produces two generations per year. Overwintering larvae typically emerge as adults and begin depositing egg masses in early June, while the second generation is usually seen in late July or early August, depending on weather conditions.

Damage to corn occurs as larvae feed on the leaves and bore into corn stalks and ear shanks. European corn borer tunneling (Figure 1) results in reduced yield potential, broken stalks, and dropped ears. Economic ECB treatment thresholds for use with corn varieties grown for grain have been developed. However, little information is available to dairy farmers and silage producers on the effects of European corn borer on corn grown for silage.

Recently, three years of research evaluating the impact ECB on silage corn yield and quality were conducted in Wisconsin. In these studies, various levels of ECB infestation were tested using laboratory-reared corn borers. Plots were evaluated to determine what level of infestation would reduce corn silage yields to the point where control measures would be economically warranted.

What is the impact of European corn borer on silage yields?

We evaluated three popular dual-purpose grain/silage hybrids. While hybrids varied in yields and quality, the impact of corn borer feeding remained the same for each hybrid used in these field research plots. 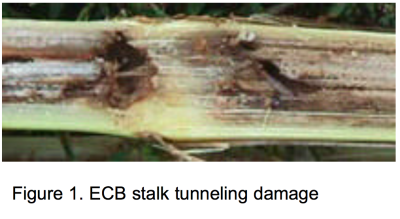 Our results showed that silage quality was not affected by leaf feeding and stalk tunneling. After samples were analyzed for forage quality, researchers used the Milk 95 spreadsheet (Undersander et al., 1993) to calculate potential milk/ton from these forages. These spreadsheets account for the percent of energy in the ration coming from forage. No significant differences were found among the silages for milk production potential. The only differences between these silages would be due to forage yield potential, not forage quality parameters. 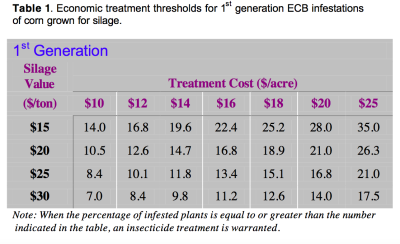 What is an economic treatment threshold and how are they used?

An economic treatment threshold is a pest density at which control measures need to be initiated in order to avoid economic losses because of damage caused by insect feeding.

In the case of ECB damage to corn grown for silage, the economic treatment threshold is the percentage of plants infested with corn borer egg masses sufficient to cause silage yield losses that would exceed the cost of an insecticide application. Using data from research studies, economic thresholds have been calculated for 1st and 2nd generation ECB on corn grown for silage and are presented in Table 1.

Determining the economic threshold for ECB damage in corn silage.

Select Table 1 for 1st generation ECB scouting or Table 2 for 2nd generation infestations. Next, select the treatment cost – the cost of an insecticide application needed to control ECB – from the upper row 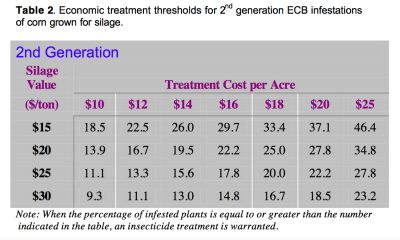 of the table. Then choose an estimate of corn silage value from the left-hand column (silage values are based on a “wet weight” of 65% moisture). Follow the selected row and column to where they intersect to determine the economic treatment threshold level for your field. When the number of corn borer infested plants is equal to or greater than the value in the table, an insecticide application is warranted.

Infested plants are those corn plants that have ECB egg masses deposited on their leaves or with leaves showing feeding scars such as “window paning” caused by early instar corn borer larvae.

Insecticide applications to control European corn borer are most effective when they are applied after eggs begin to hatch and before the larvae begin to tunnel in to leaf midrib, sheath, and stalk tissues. Insecticides that provide residual control for a few days after application are preferred, as they will kill late hatching larvae. The values provided in the table are based on 80% efficacy of an insecticide application, and does not account for any additional costs of scouting fields to detect corn borer population densities.

Our research shows that economically damaging levels of ECBs can be found in corn grown for silage. Corn silage growers need to consider the potential for economic damage when producing this crop. An effective ECB control program starts with early season scouting to detect initial populations of ECB egg masses or early signs of feeding. Then, if warranted, insecticides need to be applied in a timely manner to provide maximum control of corn borer larvae.

Milk95 is an improved version of the spreadsheet referred to in the following paper:
Undersander, D.J., W.T. Howard, and R.D. Shaver. 1993. Milk per acre spreadsheet for combining yield and quality into a single term. J. Prod. Agric. 6:231-235.