Change in RFV and RFQ of Alfalfa During the Spring Growth 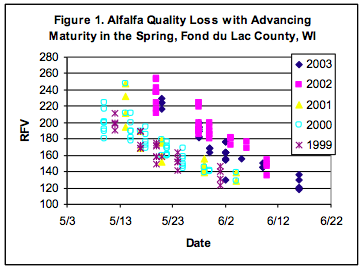 We have used RFV to determine when to harvest first cutting for consistent quality for over 20 years.  Alfalfa quality declines at a constant rate near harvest in the spring.  However, as shown in figure 1, the lines of quality decline differ among years. If 180 RFV is the harvest quality goal, this point was reached on about May 18th in 1999 to 2001 but not until June 2nd in 2002 and 2003.

Thus, it is important to measure quality in the field before harvesting.  The UW extension service, cooperating with many others, has coordinated a scissors clip program where forage was sampled, analyzed for quality and the results reported.  More recently forage quality has been more easily estimated with the forage quality (PEAQ) stick.  With this stick (or a yardstick) we measure the height of the alfalfa, determine the stage of the most mature stem, and estimate quality of the standing forage.

The value of digestible fiber for estimating energy of forages to better balance rations is well documented recommended by the National Research Council (NRC).  To be consistent with NRC changes, we have changed from RFV, using fiber only, to Relative Forage Quality (RFQ) which uses the summative TDN (including digestible fiber) and adjusts intake for digestible fiber.  Digestible fiber varies at similar fiber levels.  RFV and RFQ will be the same when digestible fiber is average. 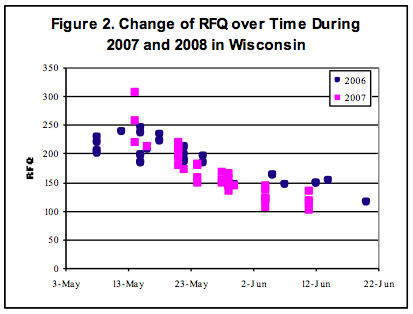 Since digestible fiber is usually higher than average on first cutting, the relationship between RFV and RFQ will not be constant among cuttings.  However, our main concern is first cutting which is the usually the largest tonnage cutting and targeted for the dairy herd.

We ran analyses of scissors clip samples from multiple cuttings and sites to determine the relationship between the two indices.  Figure 2 shows one important finding – that the rate of RFQ change was linear near harvest, as has been the case with RFV.  This is significant because it allows the grower to project when forage will be ready to harvest based on the reading of any given day. 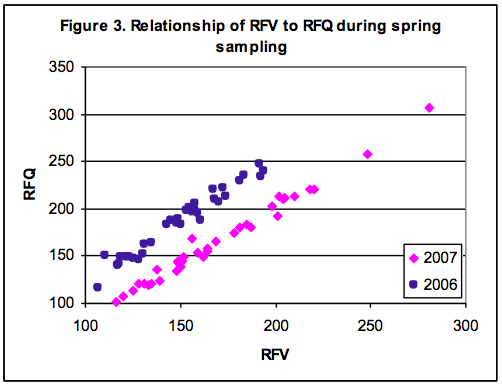 Greater accuracy can be achieved by analyzing a single forage sample to determine the Relative Forage Quality and then adjust assuming a change of 3.6 points decline per day.