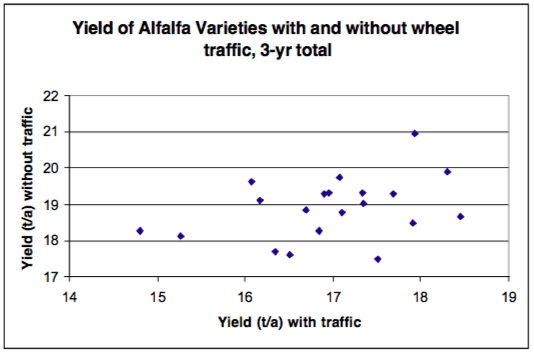 The yield for the first study conducted at Arlington, Wisconsin and summed over 3 years for each entry comparing wheel traffic to no wheel traffic is presented in the graph to the right. While all varieties showed some yield reduction due to wheel traffic, some entries were less affected than others. A number of varieties yielded up to 1.0 t/acre/year less with wheel traffic than the same variety without wheel traffic.

Based on the data from this study and the consistency of ranking across years, we have begun a variety trial with and without wheel traffic.

Yield reductions due to wheel traffic can be related to physical damage to the soil and plant. Deep soil compaction is related to axel weight and surface soil compaction is related to contact weight (weight per surface area of wheel contact with soil). Wheel compaction usually only occurs on heavier soils. Wheel traffic damage to alfalfa crowns may result in cracking or breakage of the crown, which will reduce the shoots produced and may allow entry of disease. In five days, shoots will have begun to regrow and if they are broken by wheel traffic this will result in a yield reduction.

To the extent that the yield loss is due to damaged regrowth, the sooner the wheel traffic occurs after cutting, the less the damage will likely be. Chopping for silage at 1 day after mowing may cause less yield reduction than baling 4 to 5 days after mowing. We set up a multi-state study to see if yield reductions occurred across a wide variety of soil types and environments. We also include an additional 2 days after cutting wheel traffic treatment to compare silage making to hay making effects. 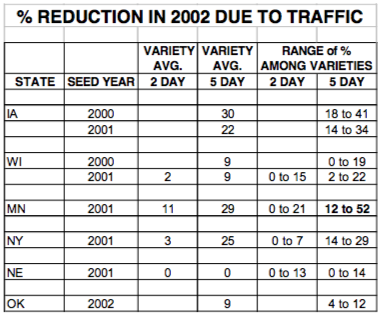 We believe the following management recommendations will reduce yield loss due to wheel traffic. These are as follows: