Session 5 consisted of two full days in Madison, Wisconsin to increase our knowledge and understanding of Wisconsin Government and issues affecting the entire state.

Once our group arrived in Madison., we went straight to the State Capitol building. There we were welcomed by Representative Kevin Peterson.

Kevin Peterson is 1 of 99 members of the Wisconsin State Assembly District.  He represents over 58,000 constituents in Wisconsin in the 40th Assembly District. Besides being a full time Legislator, Kevin Co-owns Dave’s Electronics Repair, Inc., a family-run consumer electronic business established in 1976 in Waupaca, WI. 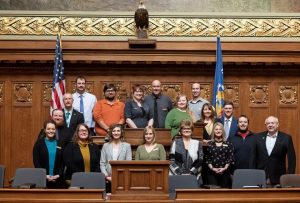 Construction started in 1906 and was completed in 1917 at a cost of $7.25 million. It is the tallest building in Madison. The Capitol was constructed of 43 types of stone from six countries and eight states, including Wisconsin. The Red Granite pillars are even from the Waupaca-Waushara County area!

After the tour we got to meet with Chief Justice Patience Drake-Roggensack. She talked briefly about the types of court cases that go before the Supreme Court.

We then broke out into our Team Project groups to meet with a representative assigned to each team. The Representatives were there to help with any known legislative issue related to each project.

We rounded out our time at the capitol with the Director of Courts, Randy Koschnick. He was appointed by the Wisconsin Supreme Court. Randy shared about what he does in his role as the director and his work setting up the online CCAP court records system.

We ended our first day with Dinner at the Essen Haus where we enjoyed a tour of the Essen Haus by owner Bob Worm. Bob is from the Royalton area of Waupaca County. He talked about how he started his business and how he remodeled an old single room occupancy building into a thriving Bed and Breakfast, The Ruby Marie. This was followed by a family style meal of authentic German Food.