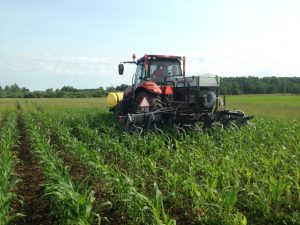 Lorre Kolb: The benefits and challenges of cover crops. We’re talking today with Matt Ruark, Extension soil scientist, University of Wisconsin-Madison, Division of Extension and the College of Agricultural and Life Sciences and I’m Lorre Kolb. Matt, first can you explain what are cover crops and what’s their purpose.

Matt Ruark: Cover crops are grown to protect the soil; so they’re crops grown that won’t be harvested. Cover crops are ones that are used for erosion control purposes to suck up excess nutrients in the soil and to build soil health. So there’s been a lot of interest in the farming community over the past decade of how to get more cover crops into our Wisconsin crop rotations

Lorre Kolb: And what are the benefits of cover crops?

Matt Ruark: The biggest benefit of cover crops is for erosion control. It keeps the soil in place and then once we have that there’s these added benefit. So one is it’s capturing a lot of the excess nutrients that can exist at the end of a growing season; so capturing it in its biomass and then in doing so it actually adds carbon to the soil. So if using cover crops for long periods of time farmers can see an increase in soil organic matter and soil health on their fields.

Lorre Kolb: And what are some of the challenges with cover crops?

Matt Ruark: Well there are some and I think it’s important that we acknowledge this right. In the work that we’ve done, in Wisconsin, in systems especially following corn silage where there’s plenty of time left over at the end of the growing season to plant a cover crop; well the cover crops do a great job of trapping nutrients and that’s good. In some cases they can trap too many nutrients and it doesn’t necessarily mean that we you’ll lose yield in that next corn crop although that can that can be possible. But it does mean that we do need to supply a little extra nitrogen to maximize yield.

Lorre Kolb: What are some of the crops that are grown as cover crops?

Matt Ruark: I like to put them into three categories. So we have grass cover crops, legume cover crops, and your brassicas. And so the grass cover crops they’re going to grow quickly, trap a lot of nutrients and are ones that you can used for long term improvements in soil carbon. The legumes have a lower C to N ratio. These are ones that decompose quickly and actually release nitrogen to the next crop. So these ones have the advantage of they’re actually supplying nitrogen to that next corn crop. And the third one are the brassicas like radish or turnip. The radish in particular is a deep rooted crop, so people like to use those to get a little bit more diversity in their cover crop mixtures and also get more tap roots growing deeper into the soil profile.

Lorre Kolb: What about next steps for cover craps.

Matt Ruark: How can we get more cover crops into our cropping systems. So it’s still so obviously have a lot of corn grown for grain and soybeans in in Wisconsin. So are there opportunities to get cover crops into these rotations. That’s a little trickier that requires a fair amount of experimentation. But in that case we’re interested in inter-seeding the cover crop. So there we’re planting the cover crops while that corn crop is growing. So there is an opportunity to get the cover crops planted, have it hang out in that understory, and then when you go to harvest you have an established cover crop in the understory. Now the trick on that is will it grow? So we’ve done a lot of experiments; the red clover tends to grow pretty well, it will hang out then understory. Could be advantageous if you have a lot of high nitrogen demand crops in rotation where you get a nitrogen supply from that that red clover. But really it’s still in the experimental phase of how much of a benefit we’re going to see and how well it will grow year to year.

Lorre Kolb: We’ve been talking with Matt Ruark, Extension soil scientist, University of Wisconsin-Madison, Division of Extension and the College of Agricultural and Life Sciences and I’m Lorre Kolb.