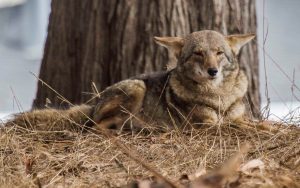 With the warm temperatures Wisconsin has been experiencing, encounters with urban wildlife will be at a yearly high. David Drake, University of Wisconsin-Madison Division of Extension wildlife specialist in the Department of Forest and Wildlife Ecology, shares information on how to not only protect yourself, but to help build suitable habitat for urban co-dwellers.

“A lot of people think about urban wildlife and equate it with overabundant wildlife or wildlife damage,” Drake said. “I would like to see if we can move the conversation away from a more negative perspective to a more positive, and to start attracting species that wouldn’t normally be there, and balance out that wildlife component so it’s not just overabundant species, but we have a more balanced picture of species of wildlife.”When describing different kinds of animals and whether or not they cohabitate urban spaces, Drake mentioned three different types: urban avoiders, urban adapters, and urban exploiters.

Urban avoiders typically avoid an urban environment because it does not contain enough suitable elements of their habitat, or the animal is inherently unwelcome. Animals in this classification include bears, mountain lions, and grassland birds.

Urban adapters, on the other hand, are animals that have adapted to the urban landscape particularly well, usually after the development of new land. Adapters include, but are not limited to, white-tailed deer, canadian geese, raccoons, skunks, and crows.

Finally, urban exploiters are wildlife that are typically not native to the United States and require a degree of human interaction in order to survive in an urban landscape. Exploiters can include house mice, European starlings, English sparrows, and Norwegian rats.

Most of Drake’s Extension research is based around building suitable habitats for urban dwellers so that they may more peacefully coexist with the human residents of urban settings. He emphasized the importance of creating biodiversity in urban green spaces, especially planting and taking care of native species that directly benefit local fauna. More information about urban wildlife is available online at urbanwildlifeproject.wisc.edu.

He said that “humans are not ever leaving the city, and the wildlife will ever rarely leave the city, so we better figure out how to live together.”