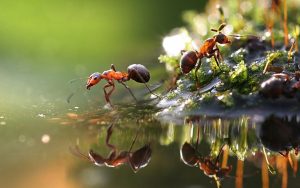 Adam Wigger: “Insects: What to watch for this season”. We’re talking today with PJ Liesch, Extension Entomologist, University of Wisconsin-Madison, Division of Extension, Insect Diagnostics Lab in the College of Agricultural and Life Sciences, and I’m Adam Wigger. Alright, I know for a lot of Wisconsinites, it’s going to be hot this summer, they’re going to have their windows open, they’re going to be on their porches, what kind of bugs and insects do we want in our homes that might come through in through those windows or that might already be there, or what insects are part of a healthy home?

PJ Liesch: So that’s a really interesting question and some colleagues published a paper a few years ago that basically surveyed the arthropods that you can find in homes around the country. So this would include insects and related things like spiders, and they found an amazing diversity of things that they could find. Dozens and dozens of different types of insects and dozens of different types of spiders. If you are in a brand new home, you probably don’t have that many insects, but if your home has been around for years or decades or even longer than that, you’re simply going to have insects around. So there’s a very common cohort of insects and spiders that I see indoors. This can include things like some of our carpets beetles. Sometimes we get pantry pests like India meal moths and things along those lines. We can sometimes see spring tales and silver fish down in basements, as well as millipedes and sow bugs or pill bugs that simply sneak in from outdoors from window wells. We can see a wide variety of spiders that simply serve as predators, wandering around the basement, feeding on the insects, because we essentially have an ecosystem indoors. Now if you do have your windows open at night, patio door open, that may allow a little bit more of chance for insects to sneak in, especially if you have houselights on at night. Theres lots of insects that could be attracted to lights at night. So they may come to a home simply being attracted by the light, so if there’s a window open and doesn’t seal very well or if there is a whole in the window screen, that can give them an opportunity to sneak in. For a lot of insects if they do sneak in accidentally, it’s kind of a wrong turn from their point of view because indoors, if you have a house with modern heating and air conditioning and a dehumidifier, its actually fairly dry indoors, and thats very harsh on insects, they have a very hard time surviving. So we can get quite a few different types of insects that temporarily sneak in and they’re not going to survive very long.

Adam Wigger: I know I see in my apartment, at least, ants, and you recently posted on the insect diagnostics lab blog about identifying insects, specifically ants, by smell – what’s that about?

PJ Liesch: Yeah so I forgot to mention ants in the last question, but to answer, a very common insect that pretty much everyone will see in their house, or in their apartment or condo at some point in their life. For the commonest ants that I see, it would be species like carpenter ant, carpenter ant, and one of the commonest ones that I’ve seen in the last couple years would be a species called the odorous house ant, and that one is interesting because you can actually identify that particular ant species by its smell. Most ants you need to get a sample and get it under magnification that may be 20x or so magnification to really look at some of the features and definitively identify it. And that can be helpful because if you don’t know the ants species, it can be harder to choose some of the management approaches to get it dealt with in your house. With odorous house ants though, if you find them, they’re tiny little black ants, but if you were to smoosh them between your fingers and smell them, they tend to have a scent kind of reminiscent of coconut, some folks say rotting coconut, or even blue cheese, a kind of fermenting smell. So thats an ant species you can actually identify by smooshing it and giving it a sniff test. And if you do identify an ant as this odorous house ant, they’re actually fairly easy to control. They tend to respond very well to sugary foods. Some ants like protein and fat-based foods, these odorous house ants tend to like sugary foods, and so you can often use a common liquid sugar based ant bait from the hardware store or garden center. They tend to go to that very readily and that can help quiet things down pretty quickly.

PJ Liesch: Today, we’ve got about fifty or so counties in the state with confirmed finds of emerald ash borer. When you look at parts of Wisconsin that really have a strong presence of that insect, its areas like southeastern Wisconsin, where emerald ash borer has come in and is killing ash trees in the thousands and tens of thousands, and is having major impacts on both natural areas and urban forests as well. Now whats a little scary to me is if you look at the map of wisconsin, and the DNR has a map showing where emerald ash borer has been found, when you look at that map on a per-area basis, about seventy five percent of the state has not seen the emerald ash borer yet. So that  tells me, even though we’ve been dealing with it for years and years already, we’re going to be dealing with it statewide for years, and even decades to come. So, unfortunately thats going to have a lot of drastic impacts. Ash trees were very widely planted in urban areas, but also if you go out into the woods in wet areas, near rivers or wetlands up north, ash trees can be very common. So this insect have some drastic impacts on the ecosystem for decades to come. In terms of what you can do about it, if you have a large area with ash trees, theres not a whole lot we can do at this point. We don’t have a great way to go out and deal with this pest on large areas. There have been some releases of beneficial parasitic wauss in the state, and the notion is that these tiny little wauss, just two millimeters long, they specifically attack emerald ash borer and kill it, and so in the long run, thats something that may help us out. In the short run, though, we’re still losing a lot of trees to this insect. If you have individual trees in your yard, maybe one ash tree, or two, or a small number of them, we do some preventative insecticides that can be applied, there are options both for homeowners, or having a professional arborist come out and treat your trees, but this is something that would have to be done on a very regular basis to maintain the health of the tree and it really needs to be done preventatively or when the tree is in good health. If your ash tree has started to be attacked by ash borer and its starting to show thinning of the canopy and that tree is declining, its probably too late at that point for it to be effective so we do have some tools we can use in certain situations, but being an invasive pest, emerald ash borer is really having some drastic impacts on the state.