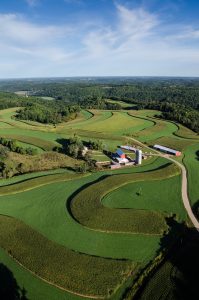 “The status of agriculture in Wisconsin has received significant attention in 2019 and has raised concerns about the health of the agricultural industry and its role in the Wisconsin economy,” says Steven Deller, Division of Extension community development economist and professor in the Department of Agricultural and Applied Economics at UW–Madison. “Despite currently weak commodity prices, particularly within dairy, agriculture remains an important part of the Wisconsin economy.”

Deller’s study is conducted every five years going back to the 1990s. For the purposes of the current study, agriculture is composed of two parts: on-farm production and food processing. Deller found that the bulk of the growth in the contribution of agriculture to the Wisconsin economy between 2012 and 2017 is growth in the food processing sector.

“These two parts of agriculture can be thought of as two sides to the same coin and as one does better the other does better,” says Deller. “The continued weak net farm income may put the food processing industry at risk. There is a clear balancing act between ensuring a healthy farm economy while continuing to promote growth in food processing.”

“The results of this analysis are very interesting, that while on-farm activity was not a major contributor to the increase in the economic impact, as a whole, the economic contribution of agriculture increased,” says Heidi Johnson, Extension Interim Agriculture Institute Director. “But this doesn’t soften the financial blow that many farms in Wisconsin are taking under continued depressed commodity prices”

Karl Martin, Extension Dean and Director says, “Information from this study also allows UW–Madison Extension to explore opportunities to provide relevant resources to individuals and communities through our educational programming. Extension is committed to finding practical, research-based solutions that support the agricultural economy in Wisconsin”

The full report, titled “Contribution of Agriculture to the Wisconsin Economy: Updated for 2017,” is online and can be found at https://go.wisc.edu/i6947n