Being an informed citizen may not seem as it relates directly to leadership but by researching, looking at several viewpoints, and then deciding your stance, is something that leaders do every day.

Taking a seat in an oversized leather chair, only after given permission, I took in the greatness of the room before me from the viewpoint of one of our state leaders.  A grand mural on the wall depicting Wisconsin and our history with industry. Above m 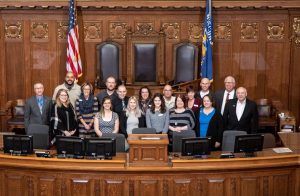 e is a large sky light with stained glass, letting in natural light.  The room feels important, as it should, this is where laws are made for the

state of Wisconsin. 2018 was the first year that I voted in a local election, before that I did not think voting in local elections really mattered.  In reality, as I learned more during my time in the capital, local and state laws often affect citizens more directly than federal. Even more importantly, local and state representatives are so accessible and easy to communicate with. This is something that became very clear to me throughout my time in the capital.  Our representatives want to hear from their constituents, when they are sitting in these leather chairs debating and ultimately voting on bills to be made into laws, they want to be voting in accordance with what the majority of their constituents want.  Pay attention and, when there is a bill that you are in favor of or against, make sure to let your representative know. You may not always be in the majority, but by speaking up for what you believe in you are doing your part as an informed citizen.  Being an informed citizen may not seem like it relates directly to leadership, but researching, looking at several viewpoints, and then deciding your stance, is something that leaders do every day.