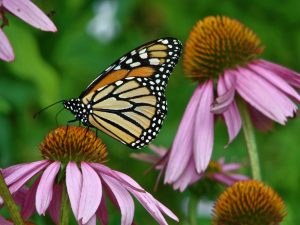 Lorre Kolb: Thinking summer and monarch butterflies. We’re talking today with PJ Liesch, Extension entomologist, University of Wisconsin-Madison, Division of Extension and the College of Agricultural and Life Sciences, and I’m Lorre Kolb. PJ, there’s some good news about monarch butterflies, can you talk about that?

PJ Liesch: So if I take a step back to the summer of 2018, we seemed to have a bumper crop of monarchs. And it was great news, but it’s always hard to take these observations and reports and know does that actually mean we have higher monarch butterfly populations. Those butterflies faced a perilous 2000 mile journey to their overwintering grounds in Mexico and a lot of bad things could have happened on the way so they wouldn’t have made it. But the seem to have made it.

Lorre Kolb: How do you count butterflies?

PJ Liesch: The eastern monarch population is assessed during the winter months. Scientists don’t go out and count individual butterflies, there’s just too many of them. What they do though is the monarchs pack down densely and they hang off of these conifer trees in a mountainous area in Mexico and so scientists can estimate the area, the acreage and that’s how they get a winter assessment of how healthy the monarch population is. And the population we saw this year is up 144% from last winter. So that’s good news. When I looked at the numbers, it’s the highest we’ve had in a decade. I also want to point out that the monarchs aren’t up here again yet, it’s going to be a while. They can still face some tough situations if they get clobbered with winter storms, with freezing rain, that can be hard on them. So we have that encouraging news at the moment.

Lorre Kolb: And why do we worry about monarch butterflies?

PJ Liesch: In a certain way, monarchs can be an indicator for other species. And it’s a very iconic species, just about everyone recognizes what a monarch is. We’ve had, been experiencing monarch declines for some time and there’s concerns there, but for every monarch there’s probably other species also facing similar declines and they simply don’t get the attention, so we can use it as an indicator for some of these other pollinator species that are out there.

PJ Liesch: These are in places like California and Oregon state, so along the western coast of the U.S. Those ones don’t migrate down to Mexico City area, instead they migrate to southern California. We do have some bad news about those. At the moment, based on overwintering counts, they’re at perilously low numbers.

PJ Liesch: So, it could be a lot of things going on. One of the big things with monarch declines is having enough food for those insects. So that’s not only milkweeds for the caterpillars, but as the adults are flying southward, they simply need flowering plants. We over the course of human history have gotten rid of a lot of their habitat; there are some diseases that can impact monarchs as well, and so all of these different factors may be at play with monarch declines.

Lorre Kolb: We’ve been visiting today with P.J. Liesch, Extension entomologist, University of Wisconsin-Madison, Division of Extension and the College of Agricultural and Life Sciences, and I’m Lorre Kolb.