The Wisconsin Geological and Natural History Survey (WGNHS), part of the University of Wisconsin-Madison Division of Extension, and the U.S. Geological Survey (USGS) will make a final presentation to the Chippewa County Board on May 14, 2019 summarizing the final conclusions of a multi-year groundwater modeling and water-resource evaluation study.

“The results will provide interested parties with technical information to support informed decision-making for future water resources within western Chippewa County,” said Mike Parsen, hydrogeologist with the WGNHS. “This study benefits water resources management efforts in the region by characterizing hydrogeologic conditions and incorporating this characterization into a computer model capable of evaluating a suite of scenarios associated with alternative management plans and/or hydrologic conditions.”

The study began in 2012 in response to citizen concerns about the possible cumulative impacts of new sand mines and irrigation on local groundwater and stream levels. Using existing and newly acquired data from fieldwork conducted within the study area, a groundwater model was developed.

The groundwater model was applied to two distinct scenarios of increased groundwater withdrawals: one evaluating hydrologic effects of more intensive industrial sand mining and the second evaluating the hydrologic effects of more intensive agricultural irrigation. Each scenario was developed with input from Chippewa County and stakeholder groups and was designed to represent reasonable future buildout conditions for both mining and irrigated agriculture.

“While the two scenarios evaluated distinctly different conditions, each was driven by stakeholder surveys and discussions,” said Paul Juckem, a USGS groundwater specialist. “Results showed that both scenarios have the potential to lower the water table and reduce base flows, particularly in headwater streams near these activities.”

In the case of irrigated agriculture, reduced base flows in headwater and down-stream reaches were associated directly with groundwater withdrawals, and the simulation represented a sustained future effect based on stakeholder-projected irrigation. By contrast, base flow reductions from industrial sand mining were the result of both groundwater withdrawals at mines and land-use changes that effectively reduced recharge to groundwater over distinct phases of active mining. This scenario included a post-mining phase, during which groundwater withdrawals stopped and mined areas were reclaimed to undeveloped prairie grass cover. If reclamation to undeveloped prairie indeed occurs as simulated, moderate long-term increases in the water table and stream base flows are possible in adjacent headwater streams. In this sense, the scenario representing buildout of irrigated agriculture led to long-term base flow declines, while the future buildout of industrial sand mining led to declines that dissipated following mine reclamation to undisturbed prairie.

The May 14 County Board Meeting will be live streamed at: https://tinyurl.com/May-14-County-Board-Meeting and all meeting materials will be made available on that webpage.

The final report, as well as all prior presentations and interim reports, is available on the Chippewa County webpage at: https://tinyurl.com/Chippewa-Co-Groundwater-Study. 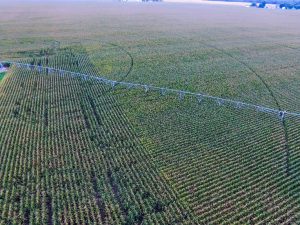