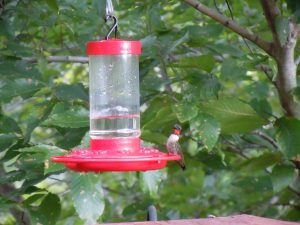 Hummingbirds are back in Wisconsin after their journey south for the winter and will be here through the end of September, according to Jamie Nack, Extension senior wildlife outreach specialist in the University of Wisconsin-Madison Department of Forest and Wildlife Ecology.

“As pollinators, hummingbirds play an important role in Wisconsin’s ecosystem, Nack says. “They’re often referred to as the ‘jewels of the garden’.”

She offers tips for attracting hummingbirds to home gardens. Instead of buying dyed mix from the store, make the food by heating four parts water to one part cane sugar and mixing until the sugar is completely dissolved. Nack warns that this mixture spoils within two to three days, particularly in warm weather, so should be changed frequently. She also says that while hummingbirds are attracted to the color red, any homemade food should not be dyed or supplemented with honey or molasses, however the feeders can be red to attract the hummingbirds.

“If you’re not looking to set out a feeder or make your own nectar, plant red tubular-shaped flowers such as bee balm and cardinal flower,” says Nack. “Another tip for attracting hummingbirds, is to hang out a mesh bag of bananas or cantaloupe to attract small insects, which hummingbirds like to feed on.”

She also notes that hummingbirds can get territorial and aggressive, especially the males at the feeder. If there are more than two or three at the feeder, put up another feeder and there will be less fighting for the nectar.

Nack says there are many interesting facts about hummingbirds including they never walk on the ground or branches; they can fly up to sixty miles per hour; they beat their wings more than seventy-five times a second and have a unique wing structure that allow them to fly backwards and hover; and despite being only between six and eight grams large, the hummingbird travels more than 500 non-stop miles in its migratory path across the Gulf of Mexico to Central America.