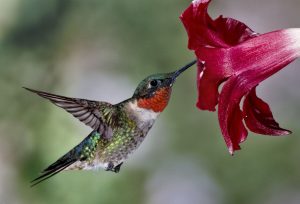 Adam Wigger: “Wisconsin’s Most Impressive Garden-Dwellers”. We’re talking today with Jamie Nack, Extension Senior Wildlife Outreach Specialist, Department of Forest and Wildlife Ecology, University of Wisconsin-Madison, Division of Extension, in the College of Agricultural and Life Sciences, and I’m Adam Wigger.  Jamie, what’s the hummingbird situation here in Wisconsin that we might see as we’re in our gardens?

Jamie Nack: Yeah so Wisconsin is home to really just one breeding species of hummingbirds, and it’s the ruby throated hummingbird. Although, occasionally, avid birders pay close attention to this, we’ll get a rufous hummingbird or there’ll be a sighting of an anna’s hummingbird. Honestly they’re more accidental and rare. When we think about the ruby-throated hummingbird, they are a migratory species, so they’re arriving in Wisconsin about the first week of May, and then they leave towards the end of September. They’re going to Central America, flying about 500 miles non-stop across the Gulf of Mexico. So pretty amazing feat for one of the smallest birds we have. But yeah, they’re super small. They have some pretty unique characteristics in that they can actually fly backwards and they can hover.

Adam Wigger: What kinds of things would they need to do that for?

Jamie Nack: They’re doing it because their role in the ecosystem is that they are pollinators. They are really important. They hover to be able to get the nectar. So they’re feeding on nectar, they also feed on small insects that they can come across. There are a few things that we can do to attract them to our gardens. They’re often referred to as the “jewels of the garden.” They rely on this nectar and we can artificially supply this nectar for them, or we can plant native plants to attract them. They’re particularly fond of the color red, and we can also plant tubular shaped flowers, and they’ll reach in and lap up that nectar, so especially red ones. A couple examples, bee balm and cardinal flower would be great ways to get started in your garden.

Jamie Nack: Yeah, so this is where you could really save some money on your pocketbook, but also keep the hummingbirds health in mind. Really, all you need to do is boil four, or I microwave it, four cups of water to one part cane sugar, mix it up until it dissolves, you’re just heating it to help dissolve that sugar more quickly. Let it cool, and then fill your feeders. You really don’t need to be buying the over-the-counter nectar mixes. It doesn’t need to be red, and you never want to add red coloring, or honey, or molasses, or anything like that. So when they’re feeding on red flowers, the nectar is still clear. Its the red flower that’s attracting. Our feeders are red, attracts the hummingbird. They don’t need the nectar to be colored. And in hot weather, you need to be careful because nectar can spoil within 2-3 days, so you want to be frequently changing that nectar as it warms up.

Adam Wigger: I’ve always been curious, what do hummingbirds do at night?

Jamie Nack: Well they would roost, they would perch in the trees, out of the wind and rain in the shelter, as most of our songbirds do, our perching birds.

Adam Wigger: Fair! Are there any other ways that Wisconsinites can help protect our pollinators.

Jamie Nack: Yeah, so the hummingbirds themselves are doing pretty well across the range. Again, super easy to attract in your yard – putting up a feeder in early May, you’re going to have hummingbirds pretty quickly. Also another trick you can do to attract them, you can hang a mesh bag with either bananas or cantaloupe and that attracts some of the flying insects, and they’ll come in and feed right off of those insects. They also love dripping leaves, or if you have a sprinkler out, and the leaves are wet, they’ll come out and take a bath, a mist bath. And it’s also really nice where you put your hummingbird feeder to have shrubs of some kind for them to perch. I often will see them perching nearby on that feeder. If you start to get a lot of hummingbirds, they can get pretty territorial and aggressive, especially the males at the feeder. So if you start to have more than two or three at the feeder, time to put up another feeder and you’ll encourage more and there’ll be less fighting for that nectar.

Adam Wigger: What are some last facts you can give us about hummingbirds, some fun information?

Jamie Nack: Yeah, so we talked about how they hover and they can fly backwards. They never walk on the ground, they never walk on the branches. They can also slow their metabolic rate and become dormant during cold nights. They can fly up to sixty miles per hour, and they can beat their wings up to seventy five times per second. All this from three inches long and weighs between six and eight grams.

Adam Wigger: Wow that’s so incredibly fast! How long do you think they could sustain that kind of speed?

Jamie Nack: Well I don’t know how long they could sustain the sixty miles per hour, that’s probably a top speed for them, but when they migrate to the Gulf of Mexico, that’s a five hundred mile trip, and its non-stop. So they are relying on the fat reserves that they build up to make that trip. So that when they get there, that wintering habitat for them, it’s going to be a warm climate obviously, but when they go south over winter, that habitat there is just as critical as their summer habitat.

Adam Wigger: So they migrate every year at the same time?

Jamie Nack: Yep! So they typically arrive in Wisconsin around May and they’ll leave towards the end of September.

Adam Wigger: Fair enough! They get to spend the best months of the year here in Wisconsin!

Jamie Nack: They do!