#FlashbackFriday This was originally published in December 2011 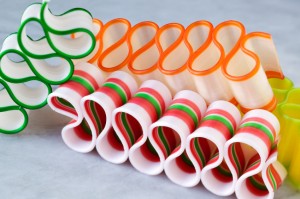 The children were nestled all snug in their beds while visions of sugar plums danced in their heads. Rich Hartel, Department of Food Science, University of Wisconsin, talks about making candy.

Sevie Kenyon: Rich, welcome to our microphone. What in the world are sugar plums?

Rich Hartel: I actually had to go look that one up myself. [laughs] Even though I work on candy, I still didn’t know what a sugar plum was, so went back to the source of all information, Wikipedia [laughs] and there is says a sugar plum is a piece of candy that’s made from dried fruits and shaped in a small, round, oval shape.

Sevie Kenyon: Some examples of this?

Rich Hartel: Never had a sugar plum in my life [laughing] and so it’s not a traditional candy that’s popular in the U.S.

Sevie Kenyon: Would this be similar to a chocolate covered raisin?

Rich Hartel: A chocolate covered raisin is…the raisin, the fruit piece itself, just covered with chocolate. I think this is the dried fruit that’s held together by some sugar syrup.

Sevie Kenyon: Well we have other candy traditions for the holidays. What can you tell me about candy canes?

Rich Hartel: So this is a hard candy, it’s got the traditional two colors, white and red, that are twisted around each other. And, it’s kind of an interesting process. We boil the sugar up to the hard-crack stage, cool it down, form it into some kind of forming device, so it comes out of that forming device as a thin piece of candy. So that the thin cylinder of candy or a tube of candy that comes out of that extruder and it’s got the multiple colors woven into that candy and then it goes through an interesting device that’s a rotating piece that kind if rotates at an off-angle. And, as it passes through that, the candy gets twisted and that’s what gives the twist to the candy cane.

Sevie Kenyon: How do they get the hook in the candy cane?

Rich Hartel: And that comes at the end, where there’s a crooking machine. And it’s just a little piece that the candy comes around it, because at this temp, at this point, that candy’s still warm. It’s still malleable, and so it can be shaped and formed still and so it goes through that crooking machine and it just kind of bends around the pulley and then of course it goes to the cooling and then packaging.

Sevie Kenyon: Any sense where this candy tradition came from, of the candy cane?

Rich Hartel: A church choirmaster in Cologne gave sticks of hard candy with a crook at the end to children in his choir to keep them quiet during long Christmas services. So, there’s no indication about why he chose that crook shape, but probably just something different that he was able to do.

Sevie Kenyon: What other Christmas candy should be know about that is common during the holidays?

Rich Hartel: I know when I was growing up that the traditional Christmas candies that we had around the house were, the ribbon candy, you know, kind of formed in a ribbon that’s pushed together, almost like an accordion. We don’t see that too much anymore, although you can find it on some specialty shops at Christmas time.

Sevie Kenyon: We’ve been visiting with Rich Hartel, Department of Food Science, University of Wisconsin, in the College of Agricultural and Life Sciences, Madison, Wisconsin and I’m Sevie Kenyon.