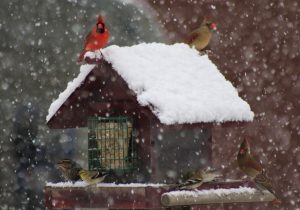 Lorre Kolb: We’re talking today with David Drake, University of Wisconsin-Madison Extension Wildlife Specialist in the Department of Forest and Wildlife and I’m Lorre Kolb. David, we’re talking about wildlife in Wisconsin in winter. What do wildlife do, both in the wild and in urban settings?

David Drake: So wildlife in Wisconsin in the wintertime have three choices, essentially. They can either stay active and stay here in our state or in a local area; they’d be what are considered resident animals and they’re here year-round, so that’s one option. The second option is to hightail it the heck out of here and go somewhere south, we have some animals that migrate out of our area so that they’re in warmer climates for the wintertime and then they’ll come back up here in the springtime. And then the third option is to sleep through the winter. So we’ve got animals that hibernate who are either true hibernators or what we might call restive hibernators or some kind of a variety of hibernation where they will sleep through the winter. So those really are three options as a wildlife species in Wisconsin, regardless of where you live.

Lorre Kolb: Does the weather affect or impact the hibernators?

David Drake: It can. So typically, what drives animals to start entering hibernation or getting prepared for hibernation or getting prepared to migrate south out of our area is that the big driver is length of daytime. So as the days start shortening in the fall, along with the shortening days, we have changing weather patterns, so now all of a sudden it starts getting colder, we have different precipitation types and levels and things like that. So all of that helps animals to kind of key in on it’s now starting, I need to start preparing for hibernation or any sort preparing for staying here for winter all winter long active, or do I need to prepare for migration out of here. So all of that is driven by that. Now, for animals that hibernate, the biggest thing in the wintertime is whether or not we have snow cover or I should say it’s just not, not the biggest thing, that’s one of the biggest things because snow cover is like a blanket, so it helps to insulate, Animals a lot of times, especially animals hibernating underneath the ground or in the ground that if you don’t have that snow cover that cold penetrates much deeper into the soil and so all of a sudden now they’re in a colder climate or colder environment subterranean and they have to start burning more energy to stay warm as they hibernate. So they’re actually burning through their fat stores quicker than they normally would if there’s a snow cover on top. So that’s one of the concerns when we don’t have the average snow cover is that those animals may be burning through their fat stores a little bit quicker than they normally would.

Lorre Kolb: And what about the animals that are living near urban centers? How does the winter impact them?

David Drake: They probably have a relatively easy time for a number of reasons. So typically in urban type areas where you have more impervious surface buildings, things like that, that you have kind of a heat island. So typically the temperature, the ambient temperature is a little bit higher than it would be out in non urban type areas because you’ve got all that impervious surfaces is absorbing and storing the solar radiation that then will be given off over the course of the day and the night. Buildings are not all that well insulated depending on when they were built, so if you are around older houses or older buildings, you know, heat’s leaking out of those buildings and so you might build a benefit from that. And on top of it, there’s just a tremendous amount of food resources in the urban type areas or in those areas are human dominated. So there’s a lot of natural food sources. So just think about the number of squirrels or rabbits or small mammals like voles and mice and rats you have in your neighborhood or your yard. So there’s just a more greater abundance of food at the natural level for these animals to take advantage of. But in addition to that, then there’s all this human provided food on the landscape that is directly provided or indirectly provided. So the most common direct provision is bird feeding. So a lot of people will put bird feeders out and all those seeds are either eaten by other birds, obviously, or small mammals, that are seed eaters. And if small mammals then are attracted to those bird feeders, then that will start drawing in some predators like hawks or owls or raccoons or fox or whatever the case might be. So there’s just a greater abundance of both natural and human provided food in those urban areas relative to non urban areas. So and these animals, if you’re here year-round and you’re active through the winter, what they’re doing to stay warm is they’re just running their metabolism all the time. And as they burn that metabolism, they’ve got to take in the amount of calories, at least the amount or preferably more calories than they’re burning otherwise, they’re going to go into an energy deficit. So it’s just easier to find food more readily available and quicker to access it in the urban areas, typically.

Lorre Kolb: So are there things that humans should be thinking about in urban areas in regard to wildlife?

David Drake: Probably the biggest thing is just to wildlife-proof your house because some of these animals are going to seek out shelter. You know, some warmer areas and your chimney or your attic or in between your walls or something like that. If the animal can get into your house or into your basement, they’re going to take advantage of that access point and then come in because it’s nice and warm there and it’s comfortable, and they don’t have to burn a lot of energy to stay warm. So that’s part of the biggest thing is just make sure that you are wildlife-proofing your house, you know, put a chimney cap on your chimney, for example, so cavity species, the cavity nesting species like raccoons, don’t occupy your chimney. Just walk around your house, look at the foundation and look along the side of your house and look where your eaves meet the side of your house and things like that and just close any gaps that you might have of maybe half an inch or larger. So either take a caulk gun or expandable spray foam or something like that. Check the vents that are coming through the roof that might vent from your kitchen or your bathroom. And if the vent pipe is open, maybe put a screen or or harbor cloth or something fitted over the top of that pipe so animals can’t get into the pipe and then into your house through the vent pipe.

Lorre Kolb: If you have determined that there are animals, what should do you do? What can be done?

David Drake: Yeah. so to be sure, you know, you may have to do a little sleuthing. Either actually look for the animal. A lot of times people might hear the animal. So if the animals in the attic, for example, they might hear it on their ceiling, traipsing across their ceiling, so that’s one option. Just poke your head up into your attic occasionally and with a flashlight, see if you’ve have animals up there. Look for droppings, feces. A lot of times animals will, especially the attic where you have insulation, animals will make beds or nests up there. And so you’ll see maybe some insulation is missing from an area; maybe it’s concentrated or compiled in another area, so that’s some things to look for as well. And if you have the animals, then you can either do it yourself so you can get a live trap perhaps and trap the animal and remove the animal that way. Or there’s plenty of companies out there you can look, you know, just Google wildlife control or wildlife pest control or something like that. And there will be companies that will take care of the problem for a fee for you as well. But regardless of what you do, before you do anything in terms of live trapping or removing the animal from your house, you have to find that access point or those access points and close those off, otherwise, the animals are just going to come back or another animal may come back in there as well.

Lorre Kolb: What wildlife can people be looking for outside?

David Drake: Well it’s interesting, some of the early migratory birds will start coming back up. So, Robin, Cedar, wax wings, bluebirds, will reappear pretty soon. And so, you know, some of the migratory birds will start trickling back in. And that’s always a nice sign that spring is on his way, even though he might be a few months out. If you’re out, especially with snowfall, you know, go out and take a hike and look for animal tracks in the snow. And that’s a really fun thing to do to kind of figure out what might be walking through there. It’s a great way to also see what might be living around where you live.

Lorre Kolb: Is that a good thing to have a bird feeder?

David Drake: Yeah, I think generally it is. You know, if you if you see birds that are starting to get some gunk or some crustiness around their eye, that’s eye conjunctivitis and so a lot of times you should take the bird feeders down for a while and let that let the birds spread out and hopefully that will go away. Make sure you clean your bird feeders with some regularity. So if you start seeing that the bird seed is starting to clump in there with some moisture, make sure that you don’t have moldy seed out there, get rid of all that so the animals don’t have access to that. And just clean your feeders with a kind of a soapy water mix, you know, every so often just to keep them clean and put good seed in, you know, clean, dry seed and. Yeah, but no, generally it’s a good thing. And typically you want the feeders to be either within three feet of a of the side of your house or a window or more than 30 feet away so that the birds don’t fly into the windows as they start leaving the feeder. You typically want the feeders relatively close to some kind of shelter or vegetation, so that if a predator comes through the birds can get off the feeder quickly and get into shelter to be safe. And there’s a lot of good information out there actually through the Extension web site about bird feeding and bird feeders and how to clean them and maintain them and the do’s and don’ts and things like that.

Lorre Kolb: And how can we find that information then?