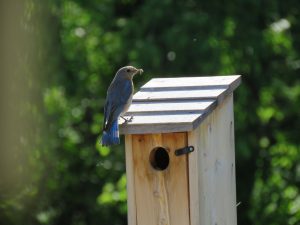 Jamie Nack: I thought it’d be a great example to highlight a conservation success story. In the early 1900s, we started to notice that Eastern Bluebird populations in North America were dwindling. And there were a couple of factors that contributed to the decline, including loss of nesting habitat, but also poor nesting success due to competition with introduced species like the European Starling and the house sparrow. Bluebirds are cavity nesters; so are starlings and house sparrows.

Jamie Nack: Yeah, so the Bluebird does not excavate. It doesn’t create its own cavity, but it’ll use a cavity from a woodpecker or if you think about fence posts that might be hollowed out on the top of them over time after they’ve been weathered, that would be a type of cavity that a Bluebird would have used back in the 1900s. And so what was happening is introduced or non-native species the starlings and the house sparrow populations started to increase and these non-natives started to outcompete Bluebirds for a very limited number of natural cavities available on the landscape to begin with. So then by the 1960s and 70s, there were efforts underway across North America to help the Bluebird by building and monitoring artificial nest boxes. And here in Wisconsin, the Department of Natural Resources put out a call for conservation minded citizens to help save the Bluebird. And as a result, our state Bluebird Restoration Association of Wisconsin organization was formed, and they spearheaded an artificial nest box program. And so that has become model program called a Bluebird Trail, which is a series of nest boxes at specific locations monitored by an individual or group with the help of BRAW – the Bluebird Restoration Association of Wisconsin. Wisconsin has seen great success in the restoration of Eastern Bluebirds and we’ve also engaged and developed a way for citizens to get involved

Lorre Kolb: And can you give us a little description of the Eastern Bluebird

Jamie Nack: Yeah, it’s beautiful bird. So the Eastern Bluebird and there is a Western species as well. But the Eastern Bluebird is found throughout the eastern part of the U.S. and Canada and down into central Mexico. They breed in the state, but they migrate to warmer climates during the winter. They’re sexually dimorphic, which means the males look quite different than the females, the males are going to be brighter in color, bright blue, both heads, tails and backs and their wings and then chestnut or red sides and their throats will be a reddish color. And then the females are more drab in color. They’re a light grayish blue color, but you can still see some of that blue on their tails and on their wings

Lorre Kolb: What kind of habitat do the Eastern Bluebirds prefer?

Jamie Nack: Yeah, so they’re going to live in open country around trees but more sparsely populated with trees. They don’t like a lot of heavy understory and they like more of a sparse grassland type ground to forage. Originally, they probably spent time in burned pine savannas or around beaver ponds or mature but open wood lots or even a forest opening where they could forage. Today you’re most commonly going to see them around pastures or agricultural fields, maybe suburban parks or an open backyard. And when you see a Bluebird, it’s often going to be spotted perching on either a fence post or perhaps an overhanging branch and they’re basically foraging; so they are looking for insects, and then they will either grab the insect in the air or they’ll trap it on the ground, and they eat insects the majority of the time throughout the year except come winter, then they might focus on fruit like currents are dogwood berries, hackberries, juniper berries, and even occasionally, they’ve been seen catching a shrew or a salamander; so a pretty large prey item for their size, but typically they’re feeding on caterpillars and beetles and crickets and grasshoppers.

Lorre Kolb:  When do they begin breeding and where do they nest?

Jamie Nack: Yeah, so it’s coming up pretty quick. So they’re one of the earlier spring arrivals, and they start nesting sooner than many, many other species. Their breeding season begins anytime from about mid March to April. And as we mentioned earlier, they’re a cavity nester, so they may use an abandoned woodpecker hole, or you can supplement these cavities by using an artificial nest box. And so the male Eastern Bluebird is going to display at a nest cavity to try to attract the female. He may even bring some material to the hole and leave it there for her but it’s the female that does the nest building itself and all of the incubation as far as the eggs go.

Lorre Kolb: How many eggs does the Bluebird lay?

Jamie Nack: Typically three to five eggs and they’re a beautiful sky blue color and they’ll actually have multiple clutches. So if they have a successful brood, they will re-nest or if something happens to the original nest they may re-nest. So oftentimes Bluebirds will have and raise two broods.

Lorre Kolb:  And how can people help the Eastern Bluebird?

Jamie Nack: You can help by building and maintaining a Bluebird nest box on your property. It’s a really great activity to get kids involved with; both the building of the bluebird houses but also the monitoring of the house and watching that nest – the eggs hatch and the fledglings get older and older or the nestlings before they fledge. There’s a variety of house plans readily available. But what’s really important is that you identify a plan specific for Bluebirds.

Lorre Kolb: And how can they find information about the Bluebird houses?

Jamie Nack: I would suggest looking at the Bluebird Restoration Association of Wisconsin’s webpage www.braw.org or doing a search for Cornell Lab of Ornithology – it’s a citizen science organization. They have a program called nest watch and along with that they provide plans on specific birds and the bird houses that are best suited for them.

Lorre Kolb: And what makes a good bird house?

Jamie Nack: Well again, in addition to making sure you select a plan designed for the species you have in mind they should be durable. They should be made out of untreated wood, so usually pine or cedar, the inside of the house needs to stay dry so we often recommend a sloped roof and drainage holes are often at the bottom of the nest box as well. And then the interior walls should have a rough texture to them so you can either kind of scratch them up or use a rougher textured wood with that so that the young nestlings are able to climb out of the box and fledge

Lorre Kolb: And when should these new birdhouses be put out.

Jamie Nack: Now, it’d be a great time to be building birdhouses and then getting them out by the end of the month. Again, Bluebirds are coming back in early March and so we want to have those boxes ready for them so they can scope out a potential nest site.

Lorre Kolb: What if you have a nest box from previous years?

Jamie Nack: If you already have Bluebird houses out, it’s really important that you clean them out. So you want to remove last year’s nest. And sometimes over winter, you have a mouse as a houseguest and you want to get that nest out of there as well. So now’s the perfect time to go and clean out any existing boxes, put up your new ones, and await the arrival of the Eastern Bluebird.

Lorre Kolb: Should you put out food for Bluebirds?

Jamie Nack: You don’t need to but you can plant native trees and shrubs that have the fruit the berries, folks will feed them mealworms during the breeding season or the nesting season, so you can do that. But they are primarily going to be capturing insects.

Lorre Kolb: We’ve been talking with Jamie Nack, Extension Senior Wildlife Outreach Specialist in the College of Agricultural and Life Sciences at the University of Wisconsin-Madison, and I’m Lorre Kolb.