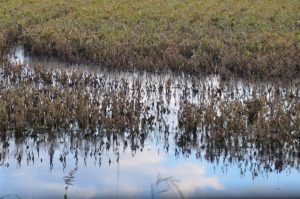 Severe flooding over the weekend has many low-lying soybean fields underwater. As the water dissipates yield potential and replant questions will arise. Flooding can be divided into either water-logging, where only the roots are flooded, or complete submergence where the entire plants are under water (VanToai et al., 2001). Water-logging is more common than complete submergence and is also less damaging. Soybeans can generally survive for 48 to 96 hours when completely submersed. The actual time frame depends on air temperature, humidity, cloud cover, soil moisture conditions prior to flooding, and rate of soil drainage. Soybeans will survive longer when flooded under cool and cloudy conditions. Higher temperatures and sunshine will speed up plant respiration which depletes oxygen and increases carbon dioxide levels. If the soil was already saturated prior to flooding, soybean death will occur more quickly as slow soil drainage after flooding will prevent gas exchange between the rhizosphere and the air above the soil surface.  Soybeans often do not fully recover from flooding injury.

Crop injury from water logging is difficult to assess. Water-logging can reduce soybean yield 17 to 43% at the vegetative growth stage and 50 to 56% at the reproductive stage (Oosterhuis et al., 1990). Yield losses are the result of reduced root growth, shoot growth, nodulation, nitrogen fixation, photosynthesis, biomass accumulation, stomatal conductance, and plant death due to diseases and physiological stress (Oosterhuis et al., 1990; VanToai et al., 1994 and 2003).  A significant amount of genetic variability for flooding tolerance among soybean varieties occurs in maturity groups II and III (VanToai et al., 1994) and likely exists for maturity group I soybeans as well.

Increased disease incidence in the surviving plants may also occur and limit yield potential. The main culprit will likely be phythophthora given the warm wet weather; however phythium, rhizoctonia, or fusarium may also occur. Differential response among varieties will be tied to the sources of genetic resistance to these diseases.

Once we can get back into the fields the decision to replant will be based on the yield potential of the current stand relative to the cost and yield potential of the replanted soybean field (Table 1). Before any decision to tear up a field is made make sure you contact your crop insurance agent to discuss coverage and you have the replant seed on your farm or at least en route. Also remember to check herbicide labels for plant back restrictions if you are planning to plant soybean into a flooded corn field.

Since full season maturity group soybeans are unrealistic for planting this late plant soybean cultivars 0.5 MG earlier than “normal”. The average yield potential for soybean planted in late June in southern WI is in the 30 to 35 bu yield range (Figure 1).  For yield potential and harvestability, (a combine may not be able to pick up the lower pods) a grower should not go to an extreme early MG for their geographic area. 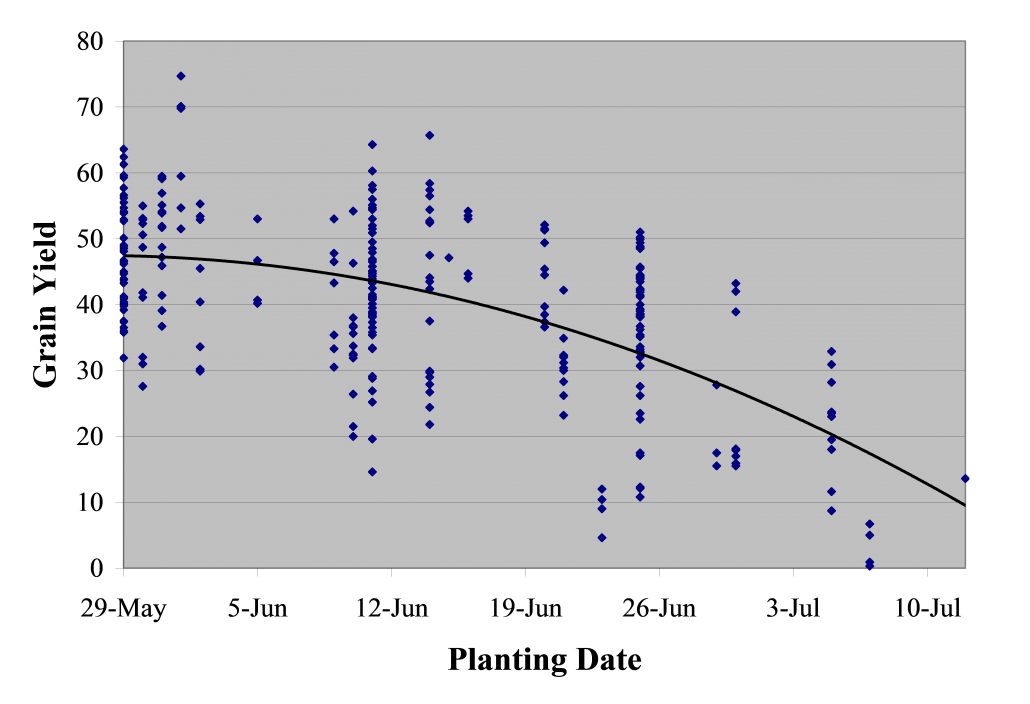