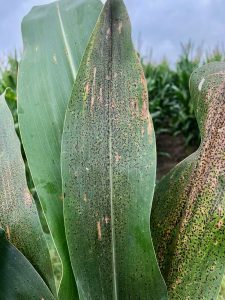 Figure 1. Tar Spot on Corn From the Arlington Agriculture Experiment station in 2018.

The phone has been ringing off the hook over the past week. In fact, this morning I had to dump my voicemail as it wouldn’t take any more messages. Why is that? For those of you who have been traveling the southern Wisconsin and Northern Illinois countryside, you know why. Holy tar spot, Batman!

Tar spot (Fig. 1) is no longer a cosmetic leaf disease in Wisconsin and Illinois. We have seen epic levels this season, resulting in severe damage in some fields and early dry-down of corn. Tar spot is a relatively new disease in the U.S. and Wisconsin. It is caused by a fungus called Phyllachora maydis. Tar spot causes small tar-like spots on the surface of corn leaves. For great information about tar spot and what it looks like, consult this Purdue Extension fact sheet. Tar spot was first found in the U.S. in 2015. In 2016 and 2017, tar spot was identified in Green, Iowa, Grant, and Lafayette counties in Wisconsin. In 2018 confirmations have been made in these same general areas, but also has expanded to include reports from as far north as Columbia Co. over to the eastern side of the state, including Fond Du lac and other areas of the corn belt. Severity has ranged from simple cosmetic damage to complete death of entire fields. Unfortunately, it is hard to discern why the epidemic is so significant here in the upper Midwest in 2018. Some anecdotal thoughts include hybrid susceptibility, environmental impacts, and synergistic reactions between multiple organisms.