Soil Compaction at Planting and Harvesting

Soil compaction is the increase in soil density due to pressure being applied to moist or wet soils, frequently from heavy vehicles. Compaction can happen any time of the year, but the risk at planting and harvest is often greater due to frequent rainfall during those months which makes soil more easily compacted. There are some simple guidelines you can use to minimize soil compaction, figure out where exactly it has occurred, and how to fix it.

I Had to Plant/Harvest When My Fields Were Wet. Are They Compacted Now?

If you worked your fields while they were wet, there is a good chance your soils are compacted to some degree. However, the exact soil conditions when you worked your fields have a dramatic impact on the likelihood and type of soil compaction. Figure 1 is a flowchart you can use to help figure out if your soils are compacted and how they might be repaired. Most important in determining if compaction occurred is whether or not the field soil was saturated or at field-capacity. 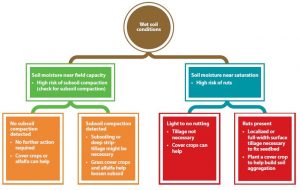 Soils are most susceptible to compaction when their water content is at or near field capacity because the proportion of soil pores filled with air and water is just right for compaction to occur. Soil well below its field capacity naturally contains tiny air pockets that work as shock absorbers that will allow them to support heavy weight without the soil particles smashing together. Also, soil aggregates help dissipate loads when the soil is drier.

Field capacity is defined as the soil water content after the soil has been saturated and allowed to drain freely for about 24-48 hours. This amount of water in the soil after this time period is just right to lubricate the movement of the soil particles and for the air to be forced out permanently.

It seems counterintuitive, but soils that are fully saturated (with their pores filled completely with water) are less susceptible to soil compaction than those at field moisture capacity. Since liquids are not compressible, a saturated soil can bear heavy equipment without compacting. However, soils at or near saturation are very prone to rutting and smearing near the surface.

There are several ways of figuring out if your soils are compacted. These including looking closely at the side of a small soil pit dug in your field, using a hand probe, or using a cone penetrometer. A detailed explanation of how to measure soil compaction can be found in UW-Extension Publication Soil compaction: causes, concerns, and cures (A3367). The penetrometer method will provide the most accurate results. UW Extension has a YouTube video showing how to use a cone penetrometer (see Additional Information). These instruments may be available for loan through your county Extension office.

The following are easily identified signs of soil compaction. It is probably worthwhile to conduct an in-depth investigation in the areas where these signs are seen.

On the soil surface

Under the soil surface

How to Prevent Compaction

Wait for drier conditions: The single most effective way to prevent compaction is to stay off wet fields for as long as possible. Soils are most susceptible to compaction 24-72 hours following a soaking rain, depending on soil type.

Manage farm traffic: Maintain repeated travel patterns between transport equipment and the harvester (i.e. driving in the same wheel track) can reduce the damage of operating on wet soils and will confine damage to specific and well-known locations in the field (see figure 2.) Global Positioning System (GPS) guidance is very helpful, but regular traffic patterns can also be achieved with some awareness and discipline on the part of the operator. 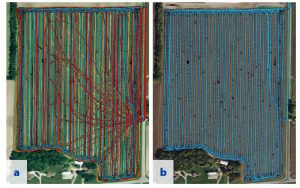 Figure 2.Part a shows an uncoordinated traffic pattern of two mergers, one forage harvester, and six transport trucks collected once per second during harvest. Part b shows the same field with a simulated traffic pattern where every machine follows in the path of the forage harvester. Although the entire field is impacted by machinery in both scenarios, corrective measures would be needed only on tire ruts from managed traffic (b) rather than the entire field (a).

How to Restore Compacted Surface Soils

Light Tillage: If ruts are present, surface tillage will be needed to improve the seedbed for planting operations. Tillage can be localized only to rutted areas. The presence of ruts does not mean you definitively have compacted soil below the surface.

Freeze/Thaw: Winter freeze and thaw conditions may also help alleviate shallow compaction depending on soil type and other conditions. Compaction should be measured with a penetrometer in the fall and spring to determine effectiveness.

How to Restore Compacted Subsurface Soils

Deep Tillage: If subsoil compaction (deeper than 6″) is detected, sub-soiling or deep strip-tilling can be helpful. Deep tilling involves breaking up a hard pan using long shanks usually to a depth of 12-15”. This should only be done when the soil is at a moisture that allows the soil to crumble at the depth you are tilling. Till only to just below the compacted zone (2” to 3” below) as deeper tilling risks even deeper compaction and uses much more fuel. Deep tilling has shown yield benefits in sandy to clay loams but in finer textured soils the benefits may be short-term due to recompaction.

Vary Tillage Depths: If a subsurface hardpan of soil has developed, tillage depth may be altered to break this up. Tillage is not a  permanent solution to address oil compaction. Identify practices that caused the compaction and modify as needed.

A You Tube video “Using a penetrometer to detect soil compaction” can be accessed at: https://youtu.be/Zq_785JqRq8?list=PLF17555C62D9A378B