Applicants and other specified parties that are dissatisfied with a zoning decision may file an appeal within time limits specified by state statutes and local ordinance.  The appeal process varies based on the type of decision being appealed and the body that made the original decision.

Decisions of the zoning administrator, such as the granting of a simple zoning permit, the interpretation of a zoning ordinance, the accuracy of measurements, or the authority of a zoning official to make a decision are appealed to the zoning board of adjustment or appeals. Conditional use decisions of the plan commission are also appealed to the zoning board as an administrative appeal, unless the ordinance provides an alternate mechanism of appeal to the governing body.1

Any “aggrieved” person and any officer, department, board or bureau of the municipality affected by an administrative decision of a zoning officer may appeal the decision within a “reasonable” time period determined by the board.2 If a time limit is not specified in the local zoning ordinance or by board rules, the appeal period begins when the aggrieved party finds out about the decision or has notice of the decision. An aggrieved person is one whose legally protected interests are affected by the decision.3

When hearing an appeal, the zoning board should review the record of proceedings before it and may take new evidence.3 The board has all of the powers of the decision-maker whose decision was appealed and may reverse, affirm or modify the original decision or issue or direct that a permit be issued. The applicant has the burden of proof of demonstrating that the administrative decision was incorrect or unreasonable.

Decisions of the zoning board, including variances, conditional uses and administrative appeals, may be appealed to circuit court. Any aggrieved person, taxpayer, officer, or body of the municipality may seek certiorari review within 30 days of filing the decision in the office of the zoning board.1

Decisions of the governing body, such as acting upon a permit application or choosing the procedure to follow in considering an ordinance may also be appealed to circuit court. Any party to the proceeding may seek certiorari review within 30 days of being notified of the final decision.2

In a certiorari action, the court will review the record using the Certiorari Review Standards. It may affirm, reverse or modify the decision appealed in whole or in part. If a decision is overturned, the court may “remand” or send the case back to the original decision-maker with instructions for further proceedings. 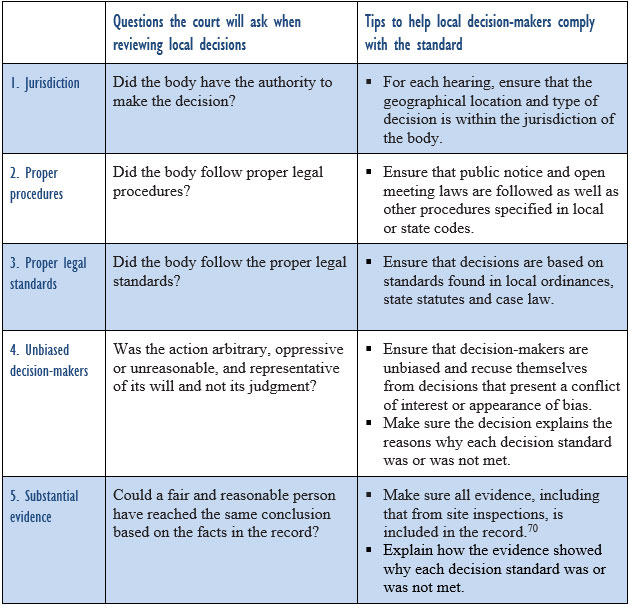