Wisconsin’s forests face a number of threats, including from invasive metallic wood-boring beetles, known as Buprestid beetles. The most famous Buprestid in Wisconsin is emerald ash borer (EAB), which is continuing to spread across the state, leaving decimated stands of ash trees in its wake. Other invasive Buprestids, like gold-spotted oak borer and oak ambrosia beetle, have not yet been found in Wisconsin. These and other species threaten our beloved oaks and other tree species. Preventing the introduction of these species is our best form of defense. This includes following best practices for purchasing and using firewood and supporting agencies that inspect incoming wood packaging material and products. Beyond prevention, the next best step is to detect newly arrived beetles as early as possible so we can respond quickly to protect our trees. How to find these beetles? Enter the smoky winged beetle bandit! 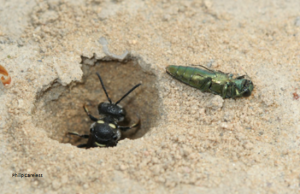 A smoky winged beetle bandit with a captured emerald ash borer at the edge of its nest entrance.

The smoky winged beetle bandit (Cerceris fumipennis), is a native stingless wasp that nests in sandy areas like baseball diamonds. Cerceris wasps capture Buprestid beetles (both native and invasive species) to provision their nests. Because Cerceris are much better at finding beetles in a forest than humans are, we can find and monitor Cerceris nests to find and identify beetles that they drop on their way to the nest. Using one species (Cerceris) to help find other species (Buprestid beetles) is called biosurveillance. 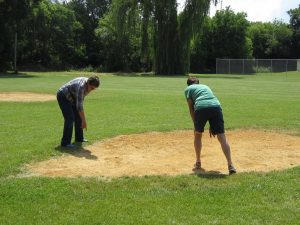 Helping with Wisconsin Wasp Watchers is as easy as scouting your local baseball field (or other area with packed sandy soil) for Cerceris nests, starting in late June. If you find nests, you then visit the site periodically through mid-September to monitor the nests and collect any beetles dropped by the Cerceris wasps. Freeze the beetles to preserve them, send them in at the end of the summer, and that’s it! We’ll help you figure out where to go and provide training!

What Have We Found?

Click on the picture below to visit our interactive results dashboard. See what past volunteers have found at their local baseball fields! 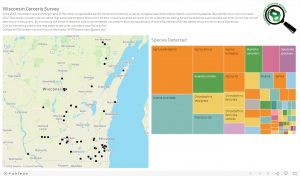 Click the image above to subscribe to the WIFDN Update email newsletter. You will learn about upcoming events, species alerts, and invasive species news.