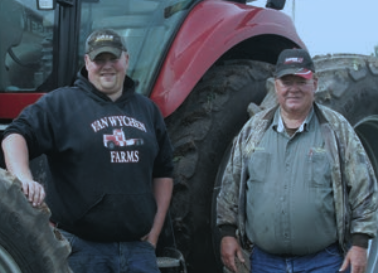 2017 marked the 100th year anniversary of Van Wychen Farms. As a family farm operation, George Van Wychen and his brother Pete are third-generation farmers, and as they near retirement, they look to pass the family legacy onto George’s two adult sons, Nick and Matt. In 2014, George joined the Fox Demo Farms project. His decision to join was based on his land stewardship principles. “I am proud of my farm and want to show what we’ve done with cover crops, erosion control, and building healthy soils here,” says George. His passion for conservation is a trait that he has passed onto his sons, who look to continue their father’s effort to improve soil health and water quality within the Fox River Basin.

Despite having followed in his father’s conservation footsteps, Nick jokingly recalls how difficult it was to “hang up the keys” to his chisel and plow and transition to a no-till system. As someone who loves to drive big equipment, it was a challenge to change not only the practices, but the mindset of how to farm. However, once he began to see the financial savings of cover crops and no-till planting, he became fully committed to the practices and equally committed to communicating the financial benefits of conservation practices to producers throughout the river basin. For Nick, it’s a win-win situation for the environment and for his farm’s bottom-line.

Matt, like his brother Nick, began working on the family farm as a teenager. However, unlike his brother, Matt was uncertain about a career on the farm. After graduating high school, Matt set out to pursue a degree in Microbiology at UW-Madison. However, along the way, he worked with a professor in the Department of Agriculture, who encouraged him to shift focus and continue his education in agronomy. Matt’s return to the family farm stemmed from George and Nick’s conservation efforts. The concept of minimizing your inputs to maximize your outputs is at the heart of Van Wychen Farms and the conservation practices they implement. For Matt, the challenge of maximizing efficiency is what drives his passion for farming. 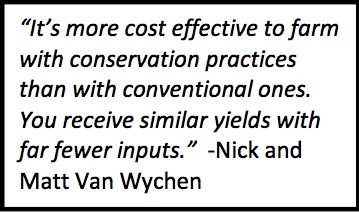 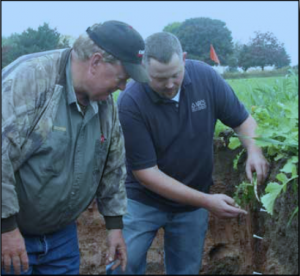 The two brothers are convinced that “it’s more cost effective to farm with conservation practices than with conventional ones. You receive similar yields with far fewer inputs.” While they both value the environmental benefits of these practices, they recognize that to continue farming, they must remain profitable and with an unpredictable market, it’s important that they maximize their profits. Fortunately, conservation practices are mutually beneficial for the environment and their pocket book.

Nick and Matt stress “making it work for you.” They advise those interested in conservation agriculture to first identify what their goal(s) are for converting practices. Once you have identified what’s most important to you and your farm, you’ll be able to tailor a conservation plan that will help you achieve your goals. When getting started it’s important to be patient and seek assistance from your local County Land & Water Conservation Department or Natural Resource Conservation Service agents. Change doesn’t happen overnight, but if you keep an open-mind to the process, the benefits are well worth it.

USDA Success Stories: Got Soil? Make it healthy! The Van Wychens show us how it’s done.