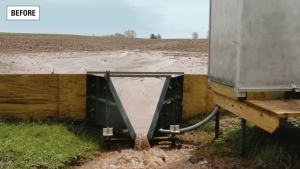 We are learning that our soil structure is a much more delicate system than we ever realized. Specifically, the soil in northeast Wisconsin presents a unique set of challenges for producers to overcome. Supported by funding from the Great Lakes Restoration Initiative (GLRI), the U.S. Geological Survey (USGS) has partnered with four Fox Demo Farms to measure sediment and nutrient loss in surface and subsurface runoff at edges-of-fields (EOF) (Image 1). Preliminary data show high losses of sediment in surface runoff (about 4,000 pounds per acre averaged annually among four sites) and low losses of sediment in the subsurface tile site (about 50 pounds per acre) relative to the state average noted in a 2011 USGS  Scientific Investigations Report (SIR) summarizing EOF data collected in collaboration with the UW-Discovery Farms and Pioneer Farm projects. Per inch of runoff, the average annual loss of sediment at the surface sites was approximately 650 pounds per acre per inch, which is more than double the reported state average (Table 1). Additional results from the EOF monitoring will help guide Natural Resource Conservation Service (NRCS) recommendations for conservation practices.

Table 1: Illustrates sediment loss for Water Years 2012 – 2016 at four EOF surface runoff sites and one subsurface tile runoff site compared to the state average as noted in a 2011 USGS Scientific Investigations Report (SIR). Note that not all monitoring sites were operational for the entire period shown. Annual sediment losses in surface runoff averaged about 650 pounds per acre per inch of runoff, which is more than twice the state average.

Preliminary data collected from the EOF monitoring sites shows that annual phosphorus losses are quite high, averaging nearly 6 pounds per acre. This is nearly triple the state average noted in a 2011 USGS report summarizing EOF data collected in collaboration with the UW-Discovery Farms and Pioneer Farm projects. As the graph below illustrates, about 80% of phosphorus leaving the fields is in the particulate form, meaning that most of this phosphorus is attached to soil particles (Figure 1). This suggests that conservation practices aimed at helping to retain soil and reduce erosion could drastically reduce the amount of phosphorus leaving producers’ fields. Again, the results from the EOF monitoring will help guide NRCS recommendations for conservation practices.

Figure 1: Credit, USGS. Initial findings suggest that 80% of phosphorus leaving project fields is in the particulate form, while 20% is in the dissolved form.

Traditional farming practices can drastically disrupt the soil system, resulting in soil erosion, soil compaction, increased inputs such as commercial fertilizers, and the loss of valuable top-soil due to increased surface runoff. Addressing these four key principles can help improve soil health now and into the future for generations to come. 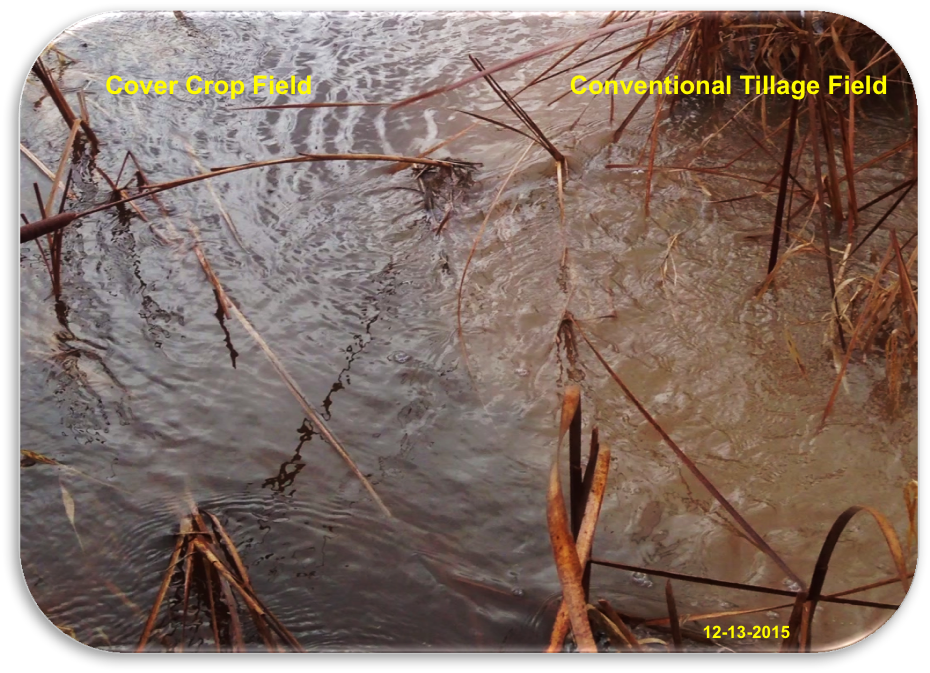 How will the samples handle the rain?

Which samples will have better infiltration rates?

Which samples will have reduced runoff?